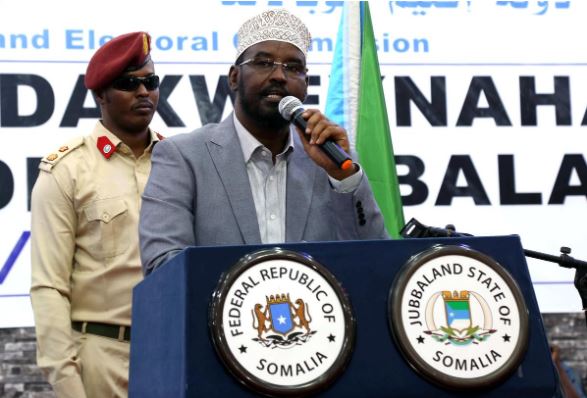 The president of Jubbaland, a Somali region of vital importance to the struggle of East Africa against the militant Islamists of Al Shabaab, has won a new term on Thursday.

The contest has created tensions between Kenya and Ethiopia, longtime allies, both with a large contingent of peacekeepers in the country, who see Jubbaland as a buffer zone against Islamist attacks in their own countries.

Kenya supports the winner Ahmed Mohamed Madobe, while Ethiopia has come closer and closer to the Federal Government in Mogadishu.

“I am ready to sit and talk to all people, including the opposition.I will speak and work with anyone who has a complaint, ” Madobe said after the vote.

A number of opposition candidates who had been barred from registering for the election said they had cast their votes in Kismayo on Thursday and voted for Abdirashid Mohamed Hidig who has since declared himself President.

The federal government in Mogadishu, which had declared the electoral process unconstitutional, rejected both competitions.

The Ministry of Interior, Federal Affairs and Reconciliation said it “does not recognize the two different outcomes in Kismayo where two people claimed to be the president of Jubbaland ”

Jubbaland is considered the breadbasket of Somalia and the capital Kismayo is a strategically important port.The coast borders a hotly contested sea zone with potential oil and gas reserves claimed by both Somalia and Kenya.

Madobe supplanted al Shabaab in 2012 with the help of Kismayo’s Kenyan forces, then took power and was first elected in 2015.

Hundreds of people gathered on the streets of Kismayo after the results were announced and sang “Long live Ahmed Madobe!” And waved his picture.

Jubbaland is the third of the seven semi-autonomous regions of Somalia to hold presidential elections ahead of next year’s national vote.

While analysts say that President Mohamed Abdullahi Farmaajo needs to exercise greater control over Jubbaland and the other regions in order to have a chance of winning next year, they also expect the federal government to reluctantly accept thursday’s results despite earlier fears of violence.

They will have to live with (Madobe), “said Hussein Sheikh-Ali, former national security adviser and founder of the Mogadishu-based think tank of the Hiraal Institute.

Al Shabaab controls parts of the territory and several cities in Jubbaland, and analysts say it could exploit the spit over the elections.

The militants who want to overthrow the Somali government have killed thousands of Somalis and hundreds of civilians across East Africa in a decade-long uprising.

Somalia has been in a state of prepetual war since the overthrow of the dictator Siad Barre in 1991.

Sources: Reuters and other wire services.