More
Home Economy Development GEOSOL: How Mayor SOLTELCO and his Friends Plan to Make Millions in... 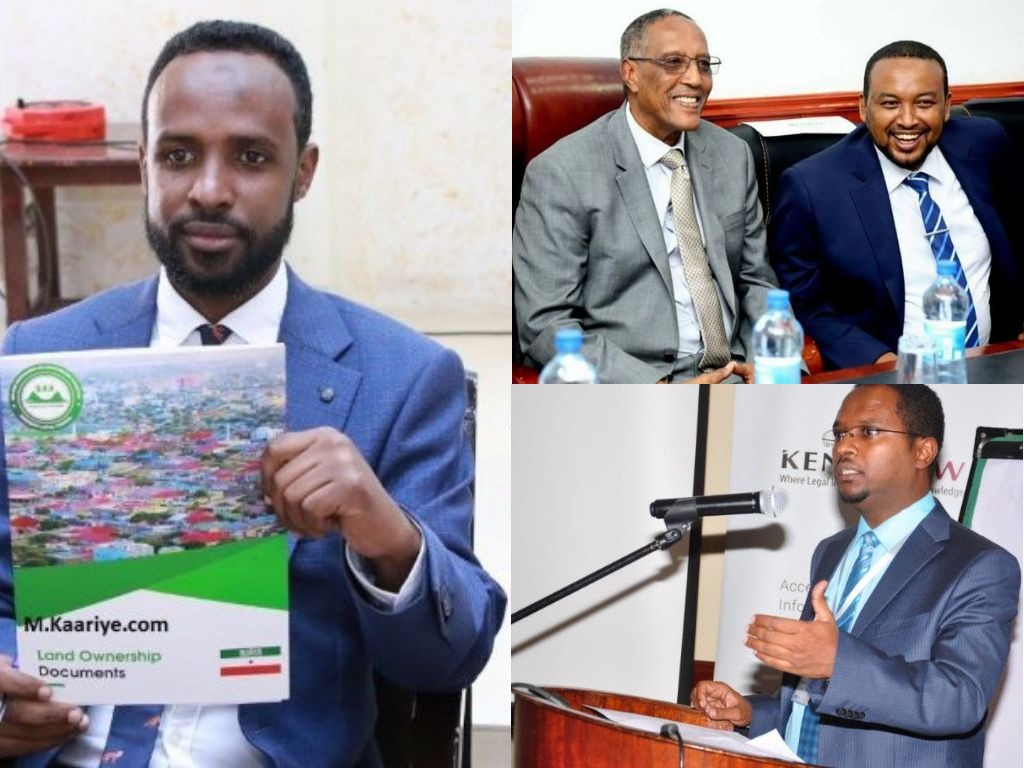 On March 26th, 2018 President of Somaliland HE Muse Bihi Abdi unveiled a program by Hargeisa Municipality to modernize and manage property and land using geographic information system or GIS.

Before we delve into the details of the history of GIS in Somaliland, GEOSOL and how it’s connection to the Mayor of Hargeisa Mr. Abdirahman Mahmoud Aidid SOLTELCO, let us understand how a GIS system would benefit Somaliland in many aspects from simple navigation to infrastructure development and town planning.

Somaliland might be one of the last countries on earth without actual home addresses, especially in main population centers and as a result, the National Identification and driver’s licenses lack an actual place of domicile.

Emergency services, whether medical and fire would not be effective without the ability to locate a victim or the address of the house that is on fire. And while Somaliland has one of the highest adoption rates of mobile communication, emergency services cannot locate subjects via GPS.

It is important to understand that this report is not about the importance of GIS and how beneficial its proper implementation would be for Somaliland and its development, instead our report focuses on the likelihood of success of this project given the record of Hargeisa Mayor and his local council during their tenure.

Brief History of GIS in Somaliland

Efforts to create GIS systems in Somaliland has been ongoing since the late 1990s by multiple UN and International NGOs. The first joint effort was started by UNHCR in collaboration with UNDOS even though it was not detailed enough for urban management and navigation.

UNHABITAT has created a GIS based land management system for many municipalities in Somaliland including Hargeisa as far back as 2004.

This is how the project is described “UN-HABITAT set up a Geographic Information System (GIS) and did a pilot land survey in Gebiley, Somaliland. A second pilot survey followed in Burao during the first half of 2003. However, the programme’s GIS and land management component fully took off with the setting up of an Urban Land Information System in Hargeisa in 2004. Experts first vectorized a high-resolution satellite image of the city, digitized all the properties and building blocks visible on screen, and then organized a door-to-door housing survey to gather information on each building’s status.”

It is unclear if the company plans to undertake the actual mapping of Hargeisa and will create the GIS data sets from scratch or will rely on the work previously completed by UNHABITAT.

The company tasked with the monumental task of modernizing Hargeisa municipality with GIS-based land management system and an E-Government platform for citizen services is GEOSOL.

In one of their many presentations, the company claimed that its leadership had 45 years of combined expertise in “Business strategy, execution, and technical solutions” and they have managed operations of over 200 million dollars.

The company has zero track record and was only registered in Somaliland on December 2017. Efforts to locate it in foreign company registries were unsuccessful.

Other than the multiple presentations with Hargeisa municipality and meeting with various government officials, there is not a lot of information about the company or its principals to assess the chances of success of this project.

There is no record of a public bid by Hargeisa Municipality and we could not locate project document including cost estimates, duration or any other specifics.

On the local council, there was not much of a debate or discussion of the project except a lengthy and incoherent speech made the Deputy Mayor of Hargeisa that included the need to catch up with Dubai and its upcoming self-driving vehicles which he correctly stipulated that a GIS system is a key to achieving it.

Few local council members spoke on the same session but they mainly complained about the fact that this was the first time they were hearing about the project and that no specifics.

Promise them the Moon

According to company presentations, the project has two facets: create a GIS system for land management and an E-Government component for citizen services including tax collection.

One thing the company promises is that it will map Hargeisa with great accuracy and that it will virtually eliminate land dispute and help unclog the court system. This is the reason the project is said to have the full support of Somaliland’s Chief Justice Adam Haji Ali.

Also, the company says it will convert existing land and property deeds into new immutable documents that will be hard to forge; it is unclear what that will entail.

The system will include a component that will be used by public notaries, presumably for property and land deed transfer from one owner to another.

The E-Government component, according to the company will offer a full range of services to citizens and will enable them to follow the progression of their case in a modern workflow system. In addition, the system will create financial transparency.

GEOSOL is trying to branch out to other areas and has met with the Minister of Finance Dr. Saad Ali Shire on a possible venture to help his ministry collect taxes.

One of the mysteries of this project is that no one knows how much it will cost perhaps except GEOSOL and the Mayor and they have not shared that information with the public including the Hargeisa local council, Ministry of Interior or the Ministry of Telecommunication and Technology.

What we do know, however, is that when the project was unveiled by the Mayor and his Deputy to the local council, a budget of 3 million dollars was added to the 2018 municipal budget. It is unclear how much of the three million has been disbursed to GEOSOL.

According to multiple Hargeisa councilmen who spoke on condition of anonymity, the Mayor has signed with GEOSOL a 20-year agreement that will institute a new set of fees that will be added to city services including annual property taxes. The fee is intended to help the company recoup the funds it has invested in the project. They added that the Mayor and his Deputy are silent partners of GEOSOL.

To get a buy-in from many government officials for approving projects, in Somaliland, it is an open secret that either an upfront payment or partnering with them is the only way to get things moving.

While GEOSOL and Mayor Soltelco has been less than transparent about the cost of the project, they stand to make a minimum of million dollars a year. Suppose there are only 100,000 taxable properties in Hargeisa and each pays an additional 10 dollars for GEOSOL’s fee.

Mr. Soltelco has accelerated the timeline to declare the system operational perhaps since his term has ended months ago without an extension from the Senate and unclear prospect for reelection.

Given that this is project is based on existing work by UNHABITAT, it’s unclear why GOESOL and Hargeisa Mayor would start a duplicate project that will cost Hargeisa residents millions of dollars for the next 20 years.

Another area of concern is the safeguarding of of personally identifiable information the system will contain and the lack of any involvement by the relevant ministries such as the Ministry of Telecommunication and Technology.

Efforts to reach the Mayor’s and his Deputy were unsuccessful. In addition, request for comment to Mr. Ibrahim Isse, a GEOSOL principal were not answered.