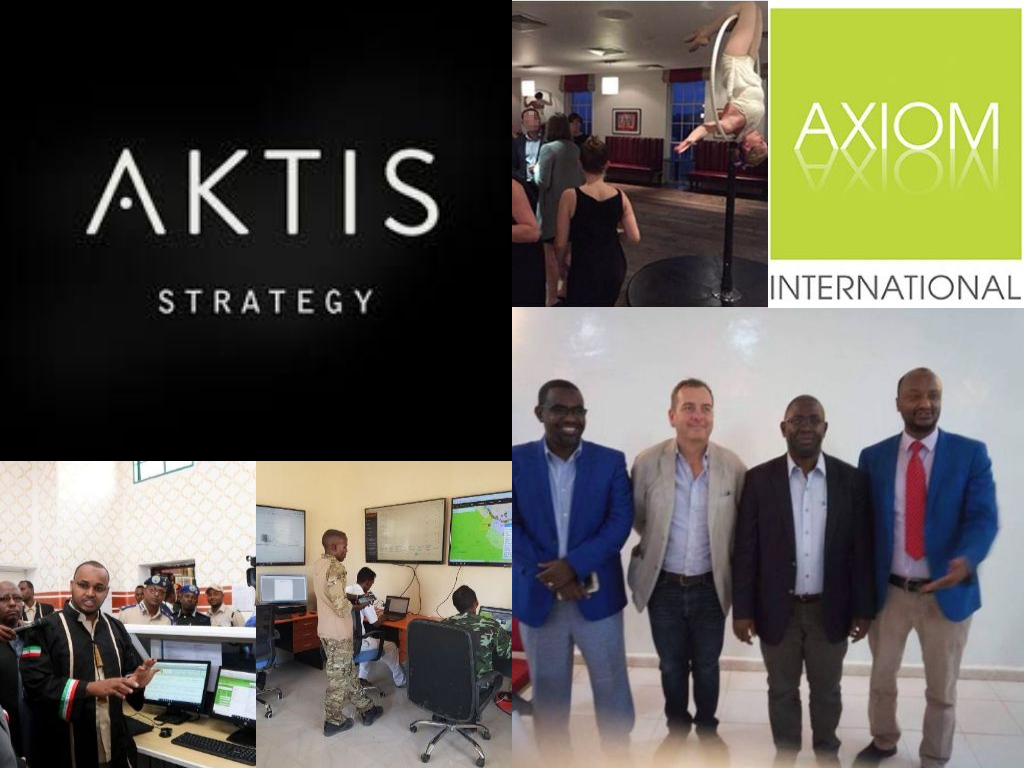 Aktis Strategy, a major contractor for the United Kingdom’s Foreign and Commonwealth Office of the United Kingdom (FCO) went into bankruptcy on March 14 leaving behind a trail of unfinished projects in Somaliland and around the world.

Aktis Strategy has been established by two former British Diplomats, Dr Andrew Rathmell and Alex Martin, who knew their way around the Foreign Office and how and where it spent the money.

What was AKTIS Strategy working on in Somaliland?

Aktis Strategy has been working in Somaliland for years, mainly in the security and the justice sectors with another British firm – Axiom International.

While Aktis Strategy seemed to have a large footprint in many conflict zones and held many lucrative contracts including work with AMISOM, Axiom International Ltd seems to be mainly in Somaliland and does not appear on the UK’s Foreign Office’s in terms of directly awarded projects.

The relationship between the two entities is unclear but it seems to have been jointly working on many defense and security-related projects in Somaliland.

The largest project that Aktis Strategy and to some extent, Axiom International has been working on is £6,885,000 CSSF Somaliland justice and security sector reform project. IATI Identifier: GB-GOV-3-CSSF-03-000012.

According to sources in Somaliland Judiciary, the now defunct Aktis Strategy and Axiom International Limited has been working on developing the case management for Somaliland courts.

According to technology specialists we have asked about the platform and its back-end system – FileMaker, they pointed to the fact it is hardly used for enterprise grade systems because it lack of scalability and comes with massive technical debt because of its proprietary nature that would rule out migration to more modern systems down the line.

Although this project has been hailed a massive success back in 2016, it does not seem to have any effect as a decongestant for the court system in Somaliland.

What happens to projects awarded and actively being worked on by Aktis Strategy is unknown.

Another area of concern is the confidential information with potential national security implication for Somaliland that Aktis Strategy has stored in its soon to be liquidated systems.

Despite the risks presented by the demise of Aktis Strategy and possibly Axiom International Ltd. These companies are insignificant compared to their much larger counterpart, Mott MacDonald.

If you have never heard of Mott MacDonald, it is the private company that manages the Somaliland Development Fund and the international partners who fund the SDF have paid it 25 Million British Pounds to manage these funds.

Mott MacDonald have has been accused of corruption and improper conduct from Lesotho, to Singaporeand everything in between.

Many former and current Somaliland officials described the Mott MacDonald and its staff who manage the Somaliland Development Fund as very powerful and pointed out the Fund Manager Mr. Anthony Njue as the last say in many government schemes the fund finances.

One former Ministry of Planning official who worked under Dr. Saad Ali Shire when he was the minister, responded with a question “hundreds of millions of dollars went through this fund, does it look like anything that is worth hundreds of millions was done in Somaliland?”

The of SDF Fund manager’s out sized role is corroborated by Somaliland Development Fund’s own documents, here are is how the Fund Manager’s responsibilities are described

Mr. Njue has been the SDF fund manager since it is inception, unfortunately, Somaliland Chronicle could not locate prior work experience in the financial industry that qualified him to run a fund of this complexity. It is unclear how and why he was selected to lead the Somaliland Development Fund.

There are serious corruption allegations that point to Mr. Njue colluding with government officials to inflate the cost of a project and split the profits. The report points to an unlawful collaboration between the Minister of Transport and Road Development Mr. Abdillahi Abokor and Mr. Njue

Mott MacDonald is paid millions to ensure Somaliland’s Development Fund are managed in a fiduciary manner, yet its long serving Fund Manager Mr. Njue seems to a case of the fox guarding the henhouse.

As the case is in many third world countries, in Somaliland foreigners are perceived to be less corrupt and more trustworthy than honest and hardworking locals but the case of Aktis Strategy and its £100,000 party, eventual collapse and trail of unfinished projects proves otherwise.

A current official in the Ministry of Finance told Somaliland Chronicle “In Somaliland, expert fallacy is so chronic that there is a dirty secret and it called bringing a white guy or a foreigner to have any glimmer hope of anything done, it’s sad but it is the reality in our country”.

Foreign firms operating in Somaliland, especially in sensitive areas with national security implication pose a particularly unmitigated risk and Mott MacDonald’s Somaliland Development Fund is the biggest of all.