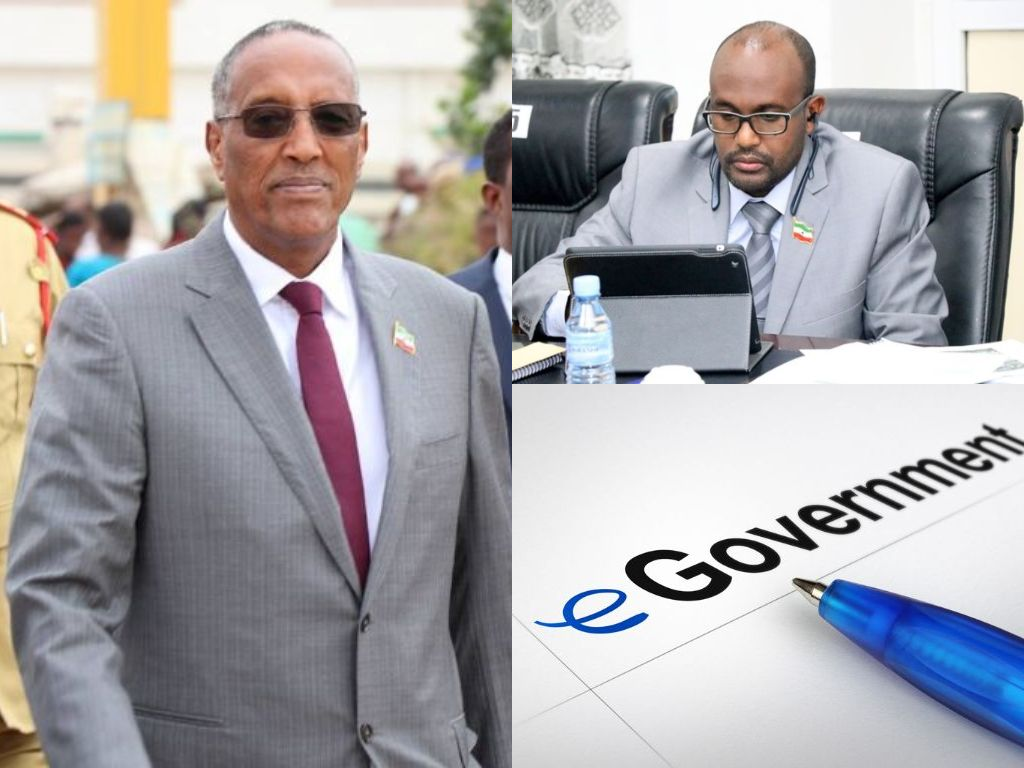 The President of Somaliland HE Muse Bihi Abdi convened an extraordinary session of his cabinet meeting on Saturday to discuss implementation of a government wide e-government system.

This is the first time in Somaliland’s history where information technology is being considered as a tool to deliver government services to the public.

Besides the e-government, another issue that was discussed in this extraordinary session was the groundbreaking idea of including information technology in the national curriculum.

Because of deregulation and fierce competition among multiple telecom providers Somaliland has one of the highest rates of cellular phone adaption and coverage relative to its size and GDP in third world countries.

While meritocracy has been an issue in Somaliland, the Minister of Telecommunication and Technology Dr. Abdiweli Abdillahi Soufi is the exception, he holds a doctorate in information technology and is one of the most qualified candidates in President Bihi’s cabinet and has had added good fortune to be assigned to what seems to be his natural habitat.

Dr. Soufi has had few mishaps in his early days as the Minister of Telecommunication and Technology when he learned the hard way that it was difficult to get a top-level domain for Somaliland from ICANN and even harder to get Somaliland it’s country code.

The Ministry of Telecommunication and Technology is one of the most anemic in terms of budget and is tasked with the Herculean task of regulating one of the most powerful industries in Somaliland – the telecom companies.

Dr. Soufi is described as a quiet operator who unlike many government officials does not enjoy attention has done something remarkable, he has convinced President Bihi that the silver bullet to deliver effective services to the public is by implementing an e-government system.

Somaliland is the perfect candidate for e-government, from allowing citizens to renew their driver’s licenses online to ordering a copy of their marriage certificate to the more complex civic duties such as local and national voting.

Implementing an e-government project is no small feat and has many challenges, the biggest of which is a turf war with other ministries and other agencies that having a high-level sponsor such as The President himself is the solution and it seems Dr. Soufi already has the President’s ear.

There are many IT heavy projects at various stages of completeness or failure – depending on your perspective. Mostly funded by the international community to the tune of tens of millions of dollars such as the government accounting system under the Ministry of Finance.

Other critical systems are being managed or developed by foreign firms, these include the court system developed by the British firm Axiom International which was also awarded the implementation of the equally critical Justice Ministry’s judicial case management system by the UK.

Some are yet to start such as the Human Resource Management system that is part of the World Bank funded project for Somaliland’s Civil Service Commission.

Technically, none of the existing systems fall under the definition of an e-government system but it is important to understand that none of them fall under the jurisdiction of the Ministry of Telecommunications and Technology.

While most of the projects predate President Bihi and his Minister, Dr. Soufi, it is unclear if the Ministry’s technical advice in any of the above projects has been sought especially on ensuring that these systems are properly secured.

Cloud vs Onprem – One of the most consequential decision that will determine the project cost and delivery timetable is if the e-government system is cloud based or a traditional on-premises route where Somaliland government will build data-centers, populate it with expensive gear and run dark fiber across the country to interconnect the system.

Open source or Proprietary – Another equally critical decision is the choice of software where providers such as IBM, Oracle and Microsoft could cost millions and comparatively Open source products that serve the same purpose are free granted that the right technical experts are sourced.

Tight as a drum – One area that cannot be compromised on an e-government system is the security of the system because the slightest misconfiguration could make the system critical to exploitation that could include data manipulation of catastrophic magnitude.

Source of funding – One of Somaliland weakness has been its reliance on foreign aid on many critical projects where spending the funds has been a priority and filing reports with donors instead of delivering a lasting solution built to address a specific need.

Another issue is the strings that come with foreign-funded projects through consultants or as in Axiom where entire companies have followed their country’s aid money to Somaliland.

Can The Doctor Deliver?

If anyone can make an e-government system a reality in Somaliland, it is Dr. Soufi but he will need the full support of the President to ensure the rest of his government falls in line to make this critical national infrastructure is implemented correctly, on budget and onetime.