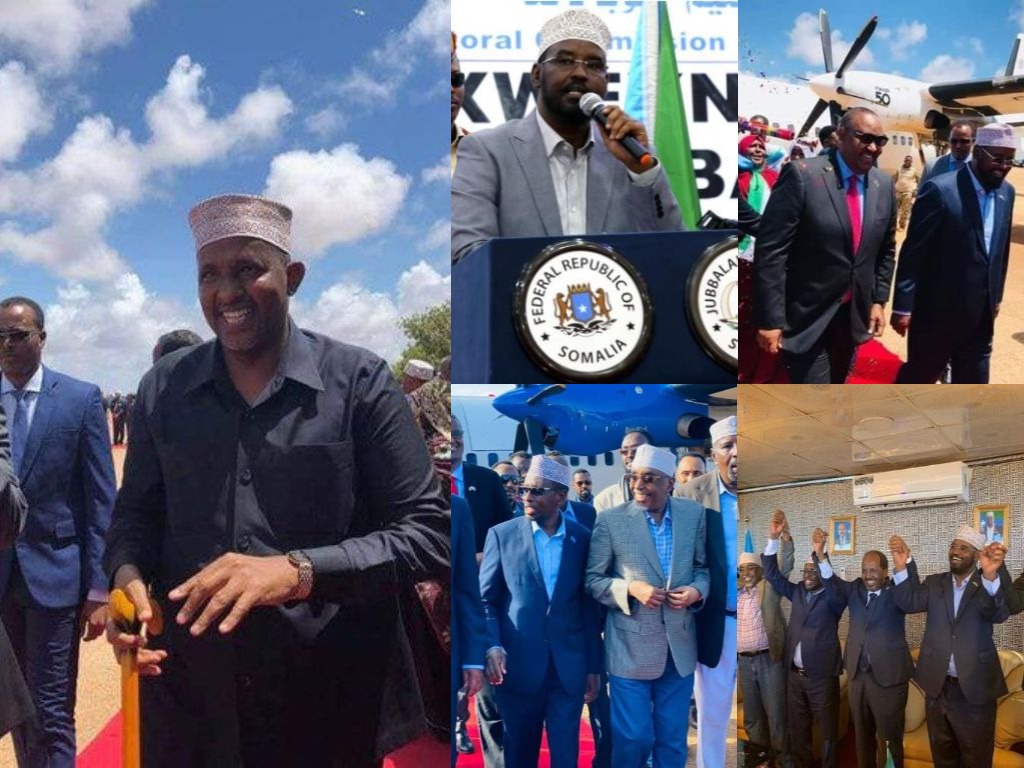 The Federal Government of Somalia has gone to an extraordinary length to ensure the President of Jubaland State of Somalia Mr. Ahmed Mohamed Islam (Madobe) does not get reelected and has financed rival candidates to declare victory to ensure the election process in Jubaland is disputed and potentially destabilize the region.

According to media reports the President of Somalia Mohamed Abdillahi Farmajo handpicked his own Minister of Air Transport and Aviation to be the next President of Jubaland.

The Somali Federal Government even arrested the Security Minister of Jubaland while on transit on Mogadishu airport for unspecified and serious human rights violation. This despite, President Mohamed Abdillahi Farmajo’s open embrace of other convicted war criminals such as Colonel Tuke.

One of the most important variables in the widening political chasm between the Somali Federal Government and Jubaland administration is the maritime dispute between Kenya and Somalia which holds substantial petroleum reserves. Despite the Federal Government’s protest of President Islam’s reelection, Kenya promptly sent its congratulations.

The United Nations did not help matters when its new Head of UNSOM and Special Representative appointment by United Nations Secretary-General António Guterres in May, Mr. James Swan also called on Jubaland to hold free and fair election in a move that echoed Villa Somalia’s sentiments .

As the adage of desperate times call for desperate measures goes, the Somali Federal Government has resorted to instituting a full blockage on Jubaland by instructing all flights to and from Jubaland’s regional Capital of Kismayo to make a mandatory stopover in Mogadishu International Airport. This order has only come into existence after the reelection of President Islam.

Villa Somalia’s air blockade of Jubaland has created a political headache when the former President of the Somali Transitional Federal Government Sharif Sheikh Ahmed was prevented from flying from Mogadishu Airport to Kismayo to attend the inauguration.

One of the unintended consequences of Villa Somalia’s attempt to prevent President Islam’s reelection and subsequently stop guests from attending his inauguration seems to be the unifying of all the Somali opposition factions.

Somali political elites including the President of Puntland Mr. Said Abdullahi Dani who is also having his own disagreements with the Federal government, former presidents and other opposition members all converged into Kismayo to attend the inauguration of President Islam.

Once again, the Somali Federal Government has protested by summoning the Kenyan Ambassador to Somalia Lt. General (Rtd) Lucas Tumbo to let him know that “Somalia strongly protests this violation and will not accept any encroachment on its air, sea and land borders, and calls on Kenya to respond to this breach while its troops stationed in the Lower Juba region are part of the African Union Mission in Somalia (AMISOM).”

The Kenyan government and specifically Somali Kenyans have thrown their weight behind President Islam by sending a delegation led by the outspoken Hon. Aden Dualeh, the Leader of the Majority in Kenyan Parliament, the Governor of Wajir County and many members of the parliament to the inauguration.

The Somali Federal Government has not relented in issuing additional directives, warnings, and demands to ensure no direct flights went into Kismayo. The latest of these was a NOTAM that no one seemed to have heeded.

Speaking to the Jubaland Minister of Constitutional Affairs Mr. Ahmed Abdirahman on the inauguration and the massive support for President Islam “The President and the people of Jubaland are grateful for their support of Somalis everywhere. The Federal Government politicized this event and try to prevent participants, trying to make us bend to the will Villa Somalia is a misguided approach and is unhelpful, it’s precisely the mindset that led Somalia down this path 30 years ago,” he said.

The public opinion in Somaliland is split on the attendance of the inauguration of President Islam and support for Jubaland, some see it as a Somalia issue and any official overtures from Somaliland government would harm its cause and equate Somaliland to a Somali regional administration such as Puntland. This is the official position of the Waddani Opposition party.

Others, such as the leader of the opposition party of UCID, Mr. Faysal Ali Warabe, who initially floated the idea of a delegation from Somaliland to Jubaland has shown support though the visit to Kismayo did not materialize.

A prominent Somaliland politician who has served as a Director-General to multiple government ministries and is a member of the ruling party of Kulmiye Mr. Mohamed Adan Elmi (Ilkacase) attended President Islam’s inauguration in Kismayo.

Mr. Elmi, speaking to Somaliland Chronicle and other media outlets was clear that he was not representing the government of Somaliland and was there at a personal capacity but reiterated the importance of engaging in the regional geopolitics.

The next chapter of Jubaland’s history is still unfolding but President Islam seems to have proven to the rest of the Somali member states that Villa Somalia’s power to write strongly-worded statements has little effect in shaping events in Somalia.

President Islam seems to have the wind on his back and fortune smiling up on him, what he does with this momentum will be a consequential even in the history of Jubaland.