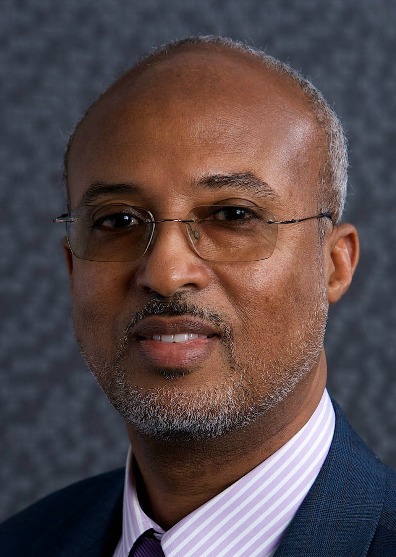 Somaliland Chronicle:  Thank you very much for granting us the opportunity to speak with you. Once again, we want to congratulate you on your appointment as Somaliland’s Representative to the United States, no doubt a hard job.

Could you tell us a little bit about yourself, academic background, professional life and anything else you want to share with the Somaliland public.

Representative Goth: I was born and raised in Somaliland, or Somalia as it was known at the time. I spent my formative years in the British built boarding schools of Sheikh and Amoud and later I attended Lafoole College of Education on the outskirts of Mogadishu. I was lucky also to have started my elementary school in Dilla School, the first co-educational school in the then British Somaliland Protectorate. A daring initiative at the time which was pioneered by my father.

I spent most of my career as a communication and media professional, working over 30 years as a journalist, news editor, and communication advisor for global energy corporations, international organizations and governments. In the meantime, I pursued further education both through instituions and through personal calling. I am an avid reader and I love to spend as much time as I could in reading or browsing through libraries and bookstores.

People know me as writer who authored numerous English and Arabic articles on political, business, cultural and social issues. My essays of critique on cultural dialogue have been translated into many languages such as French, German, Russian, Spanish, Japanese, Hebrew and Arabic. Somali people also know me as a cultural custodian and a unique voice in modern Somali poetry.

Somaliland Chronicle: Let’s also get an obvious question out of the way; Are you the right man for the job of representing Somaliland in the United States of America?

“I will do a good job beyond the call of duty”

Representative Goth:   I didn’t seek this job. I was approached by the government of Somaliland and as a Somalilander I had to accept the country’s call of duty. I, therefore, assume that you should address this question to the employer not the employee. It is the employer who decides who is the right person for the right position. But I wouldn’t have accepted the position if I didn’t know that I will do a good job beyond the call of duty.

Somaliland Chronicle: Somaliland’s representation in the US has not been as active as it should’ve been due to many factors, knowing the challenges ahead, give us a preview of your plans and what you will be doing different to make Somaliland visible in the United States

Representative Goth:  Somaliland is a beacon of hope in the Horn of Africa. It is a small country that achieved a lot without much international help. It established peace and stability through homegrown reconciliation efforts. Somaliland is not only a country that practices constitutional democracy and guarantees free elections, free speech, and free press but it is also a country that kept its land free of terrorism and its waters free of piracy.

“a model of an African solution for African problems”

My duty, therefore, is to make Somaliland’s contribution to the peace and stability in the region and the world at large visible, appreciated and supported. It is in the interest of the world, the United States included, to help Somaliland in preventing the turbulence taking place in the neighborhood from spilling over to Somaliland and hence opening new floodgates of refugees and illegal immigration.

Somaliland does not need only recognition for its statehood, which it deserves, but it needs the United States and other industrial countries to support it as a model of an African solution for African problems. Somaliland is a natural ally for the United States as a peaceful and democractic country. And this is the message I want to convey to the US authorities and institutions.

“Somaliland is a beacon of hope in the Horn of Africa”

Somaliland Chronicle:  Some have said that your predecessor has not actively engaged and utilized the strong Somaliland communities in the United States, what do you plan to do differently in terms of the Mission’s community engagement and mobilization to further Somaliland’s interest?

Somaliland Chronicle:  Because of its sheer size and how widely Somalilanders are dispersed throughout the United States, are there plans to open regional offices to serve communities in Ohio, Minnesota or Washington State and help them organize and lobby their representatives on behalf of Somaliland?

Representative Goth:  The communities have their own structures and platforms. The mission will work with all communities and whoever they elect to represent them. I will visit all the communities in all places you mentioned to acquaint myself with the activities and structures of the various communities and to find new ways to cooperate with them to win friends for Somaliland.

Somaliland Chronicle:  Diplomacy and International relations are very expensive, do you have all the resources you need to bring Somaliland front and center in the United States?

Representative Goth:  As you know Somaliland is not a recognized state and hence it doesn’t get a lot of international aid and it cannot access international financial institutions. It barely struggles to attract foreign investment for its potential energy reserves, its tourism, and its fishing and agricultural sector as well as its infrastructure. The meager revenue the country generates from tax collection is spent on the country’s security, education and on the government’s running cost. And as important as diplomatic missions are in promoting Somaliland’s cause and winning friends, they do not have the resources they need to work at their full potential. We operate on a shoestring budget to do as much as we can do.

Somaliland Chronicle:  We have recently spoken to our Minister of Foreign Affairs and International Cooperation about the changes in the region, give us your view of what is happening in the region and how it affects Somaliland?

Representative Goth:  It is obvious that the Horn of Africa is going through a period of change that started with the rise of Abiye Ahmed as the new Prime Minister of Ethiopia. The region was ripe for a change. An Ethnic conflict in Ethiopia, two-decades of military confrontation between Ethiopia and Eritrea, a decade old border tension between Eritrea and Djibouti, the internice fratricide in South Sudan, and the decades-long civil war in Somalia. This was not a normal situation by any standard and it was hampering the region’s economic growth and social development.

So, when the Ethiopian Prime Minister mended ties with Eritrea, analysts immediately sensed that this step would bring a larger positive impact to the whole region. Now, that peace looks certain in the region apart from the war-ravaged Somalia, I think the next step would be to talk about economic integration and the possibility of the Horn countries forming a strong economic bloc. Somaliland as the peaceful, stable and democratic country in the region can only gain from the new situation. I don’t think any creative thinking like that of Abiye Ahmed will ever come from Mogadishu, but it must be clear to everyone that no economic integration can be achieved without Somaliland. It is therefore my hope that Somaliland would be invited to the palace ball at the end.

“We need to measure ourselves with higher benchmarks”

Somaliland Chronicle:  As the newest member of Somaliland’s foreign services team, we have been a functional democracy for 27 years, what do you think we have done right in terms of seeking recognition from the world and is there anything that we should be doing differently?

Representative Goth:  The Somaliland diaspora community and particularly the second-generation youth who are savvier in social media should be more robust in pushing Somaliland’s recognition. We need a more united and more concerted effort by the communities for the cause. Until now, the search for recognition was widely considered to be a government job. Somaliland’s cause should be a people’s cause if we want to achieve recognition. And for the people to own the cause, we should show the world that we are serious about establishing a system based on justice, accountability, respect for the citizen’s rights, a dynamic civil society and civic engagement in public discourse. We need to measure ourselves with higher benchmarks.

Representative Goth:  I worked for the Somali Federal Government as a secondee from an international organization. I now represent the Somaliland people and government. The thought of greater Somalia was the Somali dream of our fathers and forefathers. I was of the generation who grew up with the aspiration of one day seeing a united greater Somalia. But today the reality is different. We all know that.

Somaliland Chronicle:  About your Open letter to the President of Somalia Mohamed Abdullahi Mohamed Farmaajo which is your pinned tweet, did you write it as a generic Somali and someone who believes in Greater Somalia or a citizen of the Republic of Somaliland?

Representative Goth:  Whichever you way you read it. It is an opinion piece and people are free to interpret the way they like.

Somaliland Chronicle:  Do you believe in Somaliland and it is right to exist as an independent country?

Representative Goth:  I hail from Somaliland. I represent Somaliland. And I am not aware if Somaliland has yet constituted a test for patriotism. Did you?

Somaliland Chronicle:  Finally, though Somaliland has a compelling case for international recognition and has been described ad nauseum by lots of people, as a renowned wordsmith we want to hear your version, could you tell the world why Somaliland deserves to be recognized?