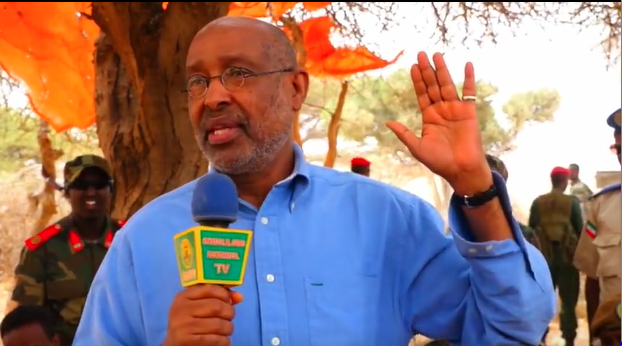 In a visit to the Somaliland armed forces stationed in Tukeraq, Professor Ahmed Ismail Samatar accompanied by high level delegation from Somaliland government thanked the troops for the valuable service to their country and conveyed deep gratitude from Somaliland diaspora.

In his trademark eloquence, the Professor said “From what I seen around the world, I have spoken in 59 universities around the world, troops, weather police of military have two prime directives and the first one is defend their country and to protect peace. That is why you are all here, its that responsibility that brought you all here.”

Professor Samatar thanked the troops from the people of Somaliland and continued “Peace that is not defended is vulnerable, so in that case peace through strength is our posture. May God be with you and seeing you brought joy and happiness to my heart”

Speaking about Puntland whose capital Garowe lies few Kilometers from where he was speaking “Our brothers in Puntland, i know many people from Puntland including Dr Abdiwali [Gaas], he has been behind me in university few classes but I know him very well, they are our people, they are Somalis, we share culture, language and religion but we are two separate nations much like the Arab countries, they are all Arabs and the Islamic faith and some are neighbors and they live side by side in peace. Our contest should be by waging war at each other but we should compete in economic development, building of higher education institutions and making our lands productive”

Professor Samatar is back in Somaliland at a time where there is speculation of cabinet reshuffle, though he had played a huge role in the election of President Muse Bihi, he has been left out of his initial cabinet appointments. Sources tell Somaliland Chronicle that he might be appointed the next Minister of Foreign Affairs.

SOMALILAND FOREIGN AFFAIRS AND THE SEEKING OF RECOGNITION AMONG ITS EXPATRIATES.