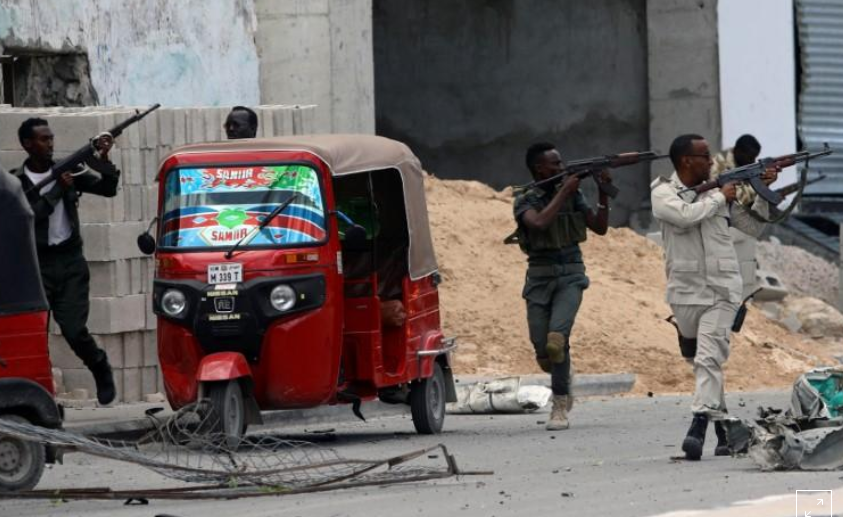 At 12 people were reported to have died in an attack on Somalia’s Interior Ministry today in Mogadishu. Ministry employees are among the casualties and the injured. Others sustained injuries while leaping from building windows and balconies.

The number of casualties could rise as new figures are still being reported from Mogadishu.

This latest brazen assault at the seat of Somalia’s power started when a suicide car bomber detonated at the gates of the Interior Ministry compound, which is less than 2 kilometers away from Villa Somalia and parliament headquarters. The Ministry of Interior is the home of Somalia’s entire security services including the National Intelligence and Security Agency.

A second blast occurred in Somalia’s capital Mogadishu on Saturday, opposite a police building, minutes after a suicide car bombing occurred near the presidential palace, a police official told Reuters.

“A second blast occurred outside Sayidka Hotel which is opposite the police building where the first blast took place,” Major Nur Ali, a police officer told Reuters. A Reuters witness heard the second blast and saw the huge clouds of smoke rising above the scene.

Al-Shabaab terrorist network has claimed responsibility for the attack on Ministry of interior adding they have killed over 20 ministry employees.

In a separate incident on Saturday, a roadside bomb killed a former district commissioner in the Lower Shabelle region and wounded three others, according to police. Al shabaab also claimed responsibility for that attack.

No official statement from Somalia’s Government or AMISOM about the attack at the heart of Mogadishu.