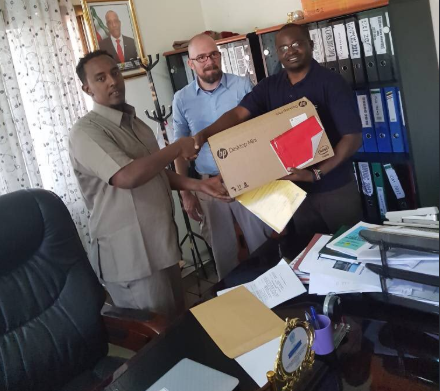 Somaliland’s Minister of Justice, Mr. Abdiqani Mohammud A’ateye (Farid) has implemented a Prison Management System that is part of a larger network managed from Mogadishu. Currently, the Prison Management system is installed in Hargeisa’s Main Prison as well as Mandhera and its purpose is to track and manage the inmate life cycle through the system.

While an ambitious project of this scale falls in the President Muse Bihi Abdi’s mandate to overhaul and modernize Somaliland’s justice system.

In a Justice Symposium held by the Ministry of Justice in February, attended by the Vice President as well as heads of UNODC, EU, SIDA, UKAID and many other donor agencies, implementation of a digital platform to manage prison population was identified by one of five top priorities for Justice reform in Somaliland. Additionally, the Minister invited Somaliland local as well as international IT companies to the meeting.

In February 26 this year, the Minister tweeted “As part of the digitization of our prison services this morning we received from our partners @UNODC Phase 1 of the Prison Data Management Information System. Digitalisation of prison service & Education for prisoners is #Somaliland gov top priority @SRSGKeating @musebiihi“. Mr. A’ateye even included Michael Keating and President Muse Bihi Abdi in his tweet.

As part of the digitalisation of our prison services this morning we received from our partners @UNODC Phase 1 of the Prison Data Management Information System. Digitalisation of prison service & Education for prisoners is #Somaliland gov top priority @SRSGKeating @musebiihi pic.twitter.com/gykpuhxy3T

“We were left stunned!” said a partner of an IT company that was engaged in active negotiation with the Minister on implementing a system that was custom designed for Somaliland. He added  “Unfortunately, he does not own the system, they gave him two desktop computers that no one knows what is in the source code”.

According to people with intimate knowledge of this issue, in a particularly difficult meeting, the Minister was strongly advised against accepting this system from UNDOC by an IT advisor to President Bihi who was guiding him in selecting the most appropriate system. The President’s IT adviser made it clear to the Minister that unless UNODC submits the source code and reference architecture for close inspection he should not accept it.

At this point, the Minister gave back to two computers to the UNODC consultants and told them he was going a different route.

Somaliland Chronicle has learned that the Minister of Justice has proceeded with implementation the same system he had rejected back in February on grounds on national security.

According to sources in the Justice Ministry, one major factor in why the Minister has accepted this system is due to lack funding and perceived pressure deliver and show a tangible progress in his justice portfolio.

The implementation of a critical system with sensitive national security information, where control of its core functionality and actual data is mixed in with Somalia’s and managed from Mogadishu seems counter intuitive in Somaliland’s current efforts to extricate itself from any dealing with Somalia.

According to IT experts, this system puts the entire control of Somaliland Prisons under the control of the United Nations and UNSOM and the data could be accessed by Somalia’s Federal Government.

It was only this month when Somalia declared to have taken control of Somaliland’s skies and has been trying to exert more pressure on many fronts including cutting off aid to Somaliland.

President Bihi Sacks the Minister of Employment and other Officials

Where would the mediation process of Djibouti between Somaliland and Somalia lead to?