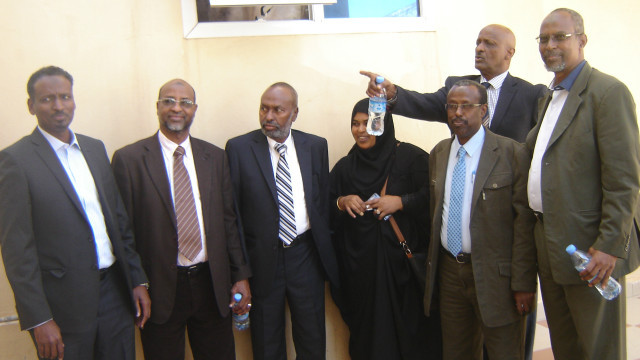 The widely discussed “Baadi Goob” documentary has once again ignited a debate that caste shadow in what has been widely perceived by both Somaliland public and the world as a free and fair election.

As imperfect as it may seem, let’s compare Somaliland to its immediate neighbors in terms of democracy, freedom of speech and advanced political discourse.

Ethiopia – The new Ethiopian Prime Minister Dr Abiy Ahmed, who some hailed as a new savoir and solver of all sorts of East African problems , was not elected by the Ethiopian public; in fact Ethiopia has never had a democratic election – ever.

Djibouti – Since gaining independence in 1977, Djibouti has been pseudo-monarchic since the death of late dictator Hassan Gouled Aptidon and uncle of current President Ismail Omer Guelleh.

Kenya – Elections in Kenya almost always result in violent conflicts, nullified election results and in the case of the last election; people had to vote a second time.

Somalia – There is no point in beating a dead horse; we all know how messy things are.

Somaliland – However imperfect it maybe, Somaliland had five different democratically elected Presidents and peaceful transition of power. Somaliland stands in stark contrast to all of the neighboring countries as a shining beacon for democracy and rule of law.

Coming back to the latest our election, there were definitely more positive than negative and though WADANI has had multiple complaints and for a period of two weeks looked like we might revert back to darker days in our young history at worse and at best become another Kenya where both Muse Bihi and Abdirahman Cirro would hold competing swearing in ceremonies. Fortunately cooler heads prevailed, and WADANI has accepted the results of the election and Mr. Cirro has put country his political ambition to pull the country from this terrible precipice.

How to Add Fuel to an Already Smoldering Fire

Then came this rather well produced documentary that alleges specific individuals of either subverting the rule of law and or overtly interfering with the democratic process to achieve a desired outcome – The election of the incumbent party’s candidate as the 5th President of Somaliland.

It looks like a rehash of the campaign slogans from some of WADANI’s rallies, where high ranking officials would swear that the election would not be fair and that votes will be stolen.

The WADANI leader on multiple occasions expressed skepticism about the fairness of the election and the legitimacy of its outcome even before the elections were held and results tallied.

This documentary, while it seems a lot of effort has gone into producing it, unfortunately it failed to consider something very important: it is adding fuel to an already smoldering fire; further dividing an already divided nation. While freedom of speech is an inalienable and a fundamental right of every Somaliland citizen, let us not confuse incitement and threat of war with freedom of speech.

Somaliland is born of out of an unimaginable cruelty and injustice visited upon its people, and it is worrying to see people call for arrest or telegraphing to law enforcement agencies to prosecute the producers of this documentary. Extrajudicial imprisonment of Somaliland citizens is something no one should tolerate. Aren’t we the very people who suffered, stood up and freed themselves from tyranny.

Freedom is in our DNA we should protect it and should never take it lightly when a government official orders the arrest of a random citizen who displeased him in one manner or another.

Somaliland is facing an onslaught from Somalia and its pawns in Puntland, and Somaliland is strong enough to withstand external pressures, internal divisions require equal and urgent attention.

Mr Irro patriotism and loyalty to Somaliland is beyond question, yet his less than forceful defense of Somaliland when it comes to external forces, and at times his almost always ill-timed issuance of statements has become a trademark. He has exhibited insincerity for political expediency as the case was for his call for prosecution of former President HE Mohamed Mohamoud Siilaanyo and resignation of current President HE Muse Bihi Abdi over the DP World Berbera deal and lease of military base to UAE. Some have pointed out his complicity as the speaker of the Parliament at the time of its approval.

Be that as it may, Mr. Irro is not the President of Somaliland; being in the opposition is easy, it harder to govern. Something our current President can definitely relate to.

It is the President’s job to bring the country and his people together. We cannot “Move Forward” as a nation if every single person that voted for Mr. Irro opposes his young administration’s policies. Reaching out and offering an olive branch is precisely what is needed in this moment to effectively govern and show the 40.5% that voted for WADANI. This is a significant slice of our population and simply ignoring them is both short sighted and ill-advised.

Here is a suggestion: Disband the Election Commissioners as demanded by WADANI. This is something WADANI and Mr. Irro has called for on numerous occasions, and while it is always tempting not to give in to opposition demands, it is a small insignificant token. In fact, it might be the best way show that there have been no backroom deals between KULMIYE and the Election Commission.

It doesn’t seem as if WADANI is asking for the bulldozing of the Election Commission’s building together with systems and a rewrite of the elections laws, certainly that is an unrealistic demand that should be simply rejected. But if all WADANI is asking for is the appointment of new election commissioners, how is this not a small compromise will not delay the upcoming local, house and senate elections.

It is your time to compromise Mr. President. It is time to bring your people together. Call Mr. Irro’s bluff and Disband the Election Commission.

Together we are SOMALILAND, TOGETHER WE ARE STRONG.

Egoism and Political Miscalculations Closely Brought Somaliland to the Brink. Opening New Political Organizations May Have Saved the Nation.