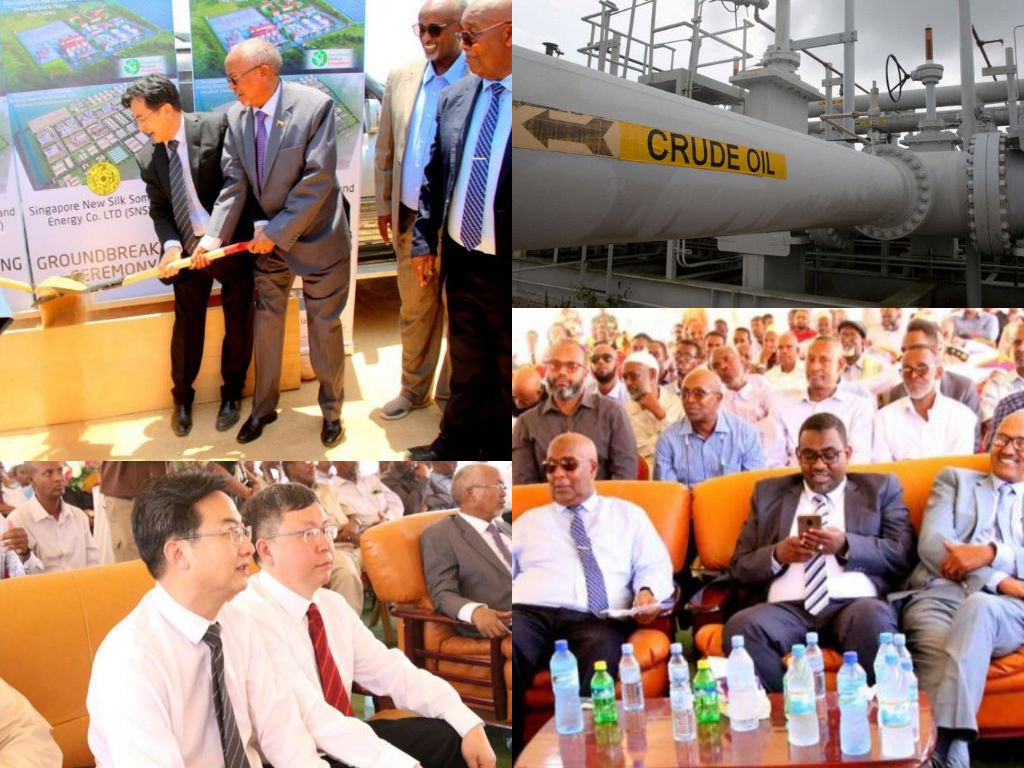 On April 10, 2019 the Vice President of the Republic of Somaliland Mr. Abdirahman Saylici and a delegation of cabinet ministers and other high-ranking officials from Somaliland government inaugurated one of the largest investment projects in Somaliland – An oil refinery plant in Berbera.

According to the Mr. Abdillahi Abdi Muse, a Somaliland businessman and one of the speakers at the ceremony, Singapore New Silk Somaliland Energy CO LTD (SNSSEC) is the sole investor of this project. His connection to the project is unclear.

Little is known about this project and details about the companies involved such as Singapore New Silk Somaliland Energy CO LTD (SNSSEC) are scarce. The closes thing we can locate is a one-year-old company with a similar name that was registered in March 2018.

An oil refinery is an expensive undertaking and the cost of setting up such an operation is in the billions. If true, this would be the largest investment by a foreign company in Somaliland.

Unlike other projects, the number of government Ministers and high-ranking officials present at the ceremony showed Somaliland’s extraordinary exuberance in this new investment opportunity.

So what do we know so far? Not a lot unfortunately. Successive Somaliland administrations and especially the current government has not done a good job in vetting companies it has so far signed deals where the announcement ceremonies had more thought put into them than basic due diligence.

Somaliland’s history is littered with many phantom investments that never materialized including a billion dollar deal with a non-existent Chinese bank, an Australian firm setting up a salt plant to end hunger, a Swedish conman who used the Vice President as a prop when he launched one of his many scam companies.

Singapore New Silk Somaliland Energy CO LTD (SNSSEC) may as well be one of these except there is not enough data to reach the most basic of conclusions – and that is a red flag.

According to a language expert we have consulted to help us translate and answer if the foreign principals from Singapore New Silk Somaliland Energy CO LTD (SNSSEC) are in fact from Singapore or China, they were unanimous in pointing out that their accents are Chinese mainland.

Even though one of the foreign executives at the groundbreaking ceremony described the event as “a day that brought Singapore and Somaliland together”.

China is investing huge sums in its belt and road initiative and while China has so far not dealt with Somaliland, there is a small chance this project might be connected.

Several people who spoke at the ceremony including the Vice President and foreign officials from Singapore New Silk Somaliland Energy CO LTD (SNSSEC) have indicated that up to 300 workers would be recruited from the Somaliland National Service and would be sent to China to be trained to work at the plant.

Price tag to build a oil refinery? Billions of Dollars

High barriers to entry and razor-thin margins make oil and gas industry particularly brutal where a plant’s size and its production capacity determine its profitability. According to oil and gas experts, a plant with less than 100,000 barrels per day capacity is not profitable.

According to oil industry experts, oil refineries are quintessentially economies of scale and the more output the larger the profit.

We have found 14 operational facilities throughout the continent that fit the bill to figure out what it takes to get one up and running.

Take the biggest one, Skikda Refinery in Algeria with an impressive output capacity of 356,500 bbl/d. It is a rather an old plant built in 1979 but a recent upgrade contract awarded to Samsung Engineering cost 2.6 Billion US Dollars. That is 2.6 Billion to upgrade it, imagine what it cost to build it.

In an effort to cut fuel imports from the United States, Mexican President Andrés Manuel López Obrador recently announced a 400,000 barrel per day plant in at the whopping price tag of 8 billion dollars.

Refineries in the oil rich Gulf nations dwarf their African counterparts. One of the largest is Ras Tanura Refinery in Saudi Arabia, operated by Saudi Aramco has an output capacity of 550,000 barrels per day.

So many questions, so little information

As big and brash the announcement of this project was, it seems that not many people actually know what it entails.

Out of several Somaliland government officials including some close to the Vice President we have reached out for comments, only one minister in President Bihi’s would speak on condition of anonymity “This one is straight from the top“ and would not elaborate further by what he meant from the top. He asked if we saw him at the ceremony and added “I am staying out of this one“.

There is a misleading line that several government officials including the Minister of Commerce Mr. Mohamed Hassan Sa’ad ‘Sachin’ and the Director of Central Bank of Somaliland Mr. Ahmed Hassan Arwo that this would be the third refinery to be build in Africa – This is categorically false and we have found quite a few refineries operational in the continent.

In fact Mackinsey Energy Insight has a list of 42 different refineries with varying output capacities operating throughout Africa.

Mr. Arwo did not respond to questions about his statement and request for additional details regarding the project.

Other details such as the source of the crude oil are not entirely clear, though Somaliland’s location puts it in close proximity to many OPEC members who export large quantities of crude.

According to Yusuf Abdalla a businessman with deep ties to Somaliland government and a close relative of the former Minister of Investment Samsam Abdi, the plant production capacity will be around 50,000 barrels per day.

Though we have not had the chance to ask Mr. Abdalla a lot of the questions we had, including his level of involvement in the project, however, he mentioned that the project is still in preliminary stages where an environmental study and others preparatory work is yet to start and added that only a Memorandum of Understanding was signed.

This contradicts the essence of the ceremony with shovels and hard hats that symbolized as a project that is being started.

Unconfirmed reports indicate that China Power will be building a large power plant as the initial phases of the project and though the fact that there is an energy production aspect to the project was alluded to some of the speakers at the ceremony, the size of the plant or its output capacity are unclear.

It is unclear how much land Somaliland government as allocated for this project, but an oil refinery will require considerable land. We could not find information related to the size of the land, location and the terms whether leased or given to the company.

There are too many red flags with this project that make it look like many of the phantom deals Somaliland has entered the past. The missing common denominator is once again basic due diligence.