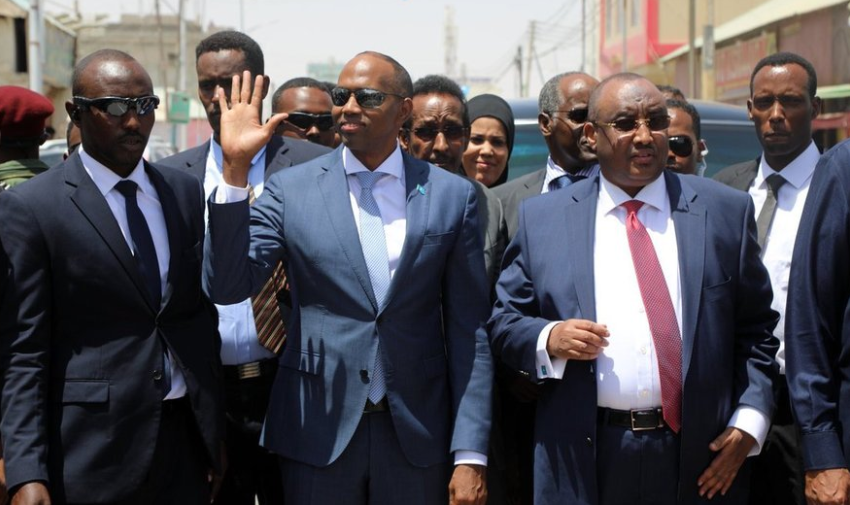 The purpose of the Prime Minister’s visit is unclear and coincides with the visit of the Somali President Farmajo’s visit to Eritrea. What is clear is that according to reports, Mr Khaire is in Garowe to show solidarity with Mr Abdiwali Gas.

Additionally, Mr Khaire’s visit is as provocative as Somali President’s visit to Garowe last January when hostilities in Tukeraq ignited with Somaliland on his second day of visiting Puntland. Since January, Somaliland forces in Tukeraq have been attacked multiple times by Puntland militias.

There are confirmed reports from Villa Somalia of power struggle between Prime Minister Khaire and President Farmajo. The two leaders of Somalia’s Federal Government have recently engaged in tit for tat sacking of officials from their government.

While Farmajo has disavowed any hand in supporting Puntland’s war with Somaliland, Mr. Khaire is said to be more directly involved if at least to undermine Mr. Farmajo, especially during his absence to his official state visit to Eritrea.

Puntland’s regional government is facing a host of issues including a resurgent Al-Shabaab and other groups associated with ISIL and an election in less than 5 months and has been accused of using the conflict with Somaliland as a delay tactic.

Somaliland Government has not addressed the visit of the Somali Prime Minister go Garowe, less than 50 km from Tukeraq.

International community is trying to mediate a truce between Somaliland and Somalia’s regional administration of Puntland.

Somaliland government has been clear about its desire to have a peaceful coexistence of its neighbors including Somalia but also that will defend the territorial integrity.