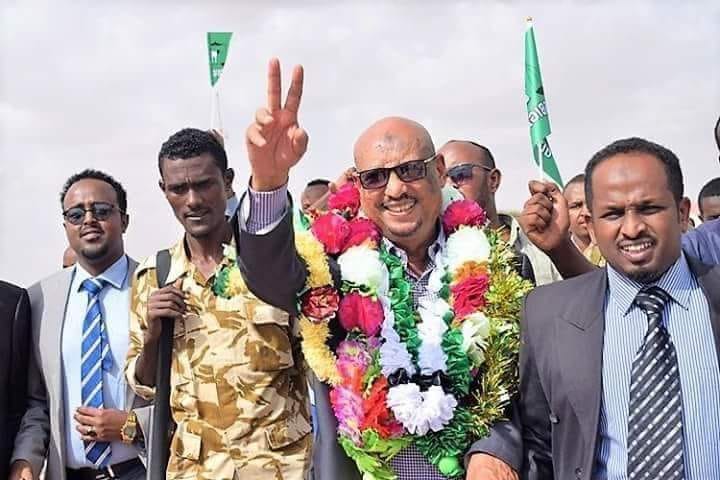 The Chairman of the opposition party UCID, Eng Faisal Ali Warabe returned to Hargeisa from a trip to Belgium where he met with the Somali President Mohamed Abdillahi Mohamed Farmajo in Brussels last week.

Mr. Warabe has also stopped in Dubai on his way back to Somaliland to attend the inauguration of the Somaliland Trade Office in UAE.

Mr Warabe was met by cheering crowds waving the UCID party flags at the Egal International airport to welcome him back to Somaliland.

Mr. Warabe’s visit to Belgium has ignited a controversy when the opposition party leader met with the Somali President.

Somaliland government has declined to participate in the Somali Partnership Forum held in Brussels, Belgium by international donors for the Somali Federal government and its regional various regional administrations.

Mr. Warabe did not attend the meeting but indicated he was there to speak with the donors on behalf of Somaliland.

It is unclear how much of a political impact the meeting with Mr Farmajo has on Mr Warabe’s close working relationship with the President of Somaliland HE Muse Bihi Abdi, who expressed shock at the news of the meeting and the surfacing of the photos of the meeting.

Upon arrival Mr Warabe addressed the welcoming crowd and touched on many topics including the controversy surrounding his initial visit to Brussels and meeting with Mr. Farmajo. While not mentioning President Bihi by name, Mr. Warabe has aired a lot of grievances and recounted his long history of working for piece and reconciliation in Somaliland.

“it is not the visit that shocked the president, its the Farmajo meeting, this is where Mr Warabe went off script”

Mr Warabe, again without mentioning any names, took a swipe at the other opposition party leader in crying foul in their recent address to the media where they accused the ruling party of hypocrisy of labeling the Wadani party as a pro-Somalia party in the run up to the recent Somaliland elections.

According to sources close to the Somaliland Presidency, President HE Muse Bihi Abdi was aware of Mr Warabe’s visit to Brussels and that Mr Warabe himself has been part of every discussion including the rejection of the government to participate in the Brussels meeting. The source added “it is not the visit that shocked us, its the Farmajo meeting, this is where Mr Warabe went off script”. These sources did not wish to be identified for fear of loosing their jobs.

Additionally, Mr Warabe stated that the plan was for himself, Mr Galaydh and Professor Ahmed Ismail Samatar to go to Brussels to show a unified Somaliland represented by the total sum of its parts, he added that Mr Samatar could not make it because of prior commitments that included a visit to the troops in the frontlines in Tukeraq.

Mr. Warabe, addressed the crowd and explaining his visit to Brussels stated that he was simply doing his duty as a citizen and reiterated the atrocities that Somaliland people suffered under the union with Somalia and for Somalilanders to live in dignity is why he want to Brussels.

“I have supported our government on its decision to secure our borders and Tukeraq is analogues to two bald men fighting over a comb, but 100 dead and wounded to achieve that goal is not something I have expected. You are all aware that we have lost the media and diplomatic wars and I have always responded to them to the point where some asked if I was the President’s Spokesman” said Mr. Warabe speaking of his continued war of words with Puntland.

Puntland leaders have called for the assassination of Mr Warabe in the recent past.

Mr Warabe referring to the current leadership in Mogadishu, pointed out that most of them have been out of the country and came from the United States and Europe and are still bitter over the toppling of the late dictator Siyad Barre.

“Ali Khalif and I have brought victory to Somaliland, out of the 500 millions that is allocated, 200 millions of it will be given to Somaliland” said Mr Warabe to a cheer from the crowd.

There is no official word from the EU donors in the Somalia Partnership Forum that any funds are specifically earmarked for Somaliland.

“if we see that the ones in charge do not have a capacity to lead this country, we will come up different plans” Mr Warabe

Mr Warabe spoke of the longtime he has known the Somali President and his family and said “He had requested to meet with us and we told him of the things that are said behind his back that he is beating the drum of tribalism and war and that he has been supporting Puntland’s Abdiwali morally and materially and he had swore that he was not involved in all of it. We have agreed that he will indirectly ensure others will withdraw support from Abdiwali, we agreed to restart Somaliland/Somalia talks immediately” Mr Warabe added that conditions of mutual trust must be worked on to ensure negotiations can be conducted, otherwise the parties will remain enemies in perpetual face-off.

“The President’s job is to bring people together and unite them and to bring them development and prosperity, this is the first President who prefers war of words and animosity to cooperating and working relationship, this is a first for us but I am not going to get into a back and forth with Muse Bihi, because if that happens the country will not exist” Mr Warabi said speaking of the President of Somaliland HE Muse Bihi Abdi.

“are we better off than we were seven months ago”

In what seems like a direct response to the President Muse Bihi Abdi’s recent speech in which he spoke of his view of the meeting with Farmajo, Mr Warabe said “You have all heard MP Abdiqadir Jirde, who is one of those rare folks that know what they are talking about and MP Kajandhe and see how concerned they are about the state of the country, we we will see each other right after we are done with Tukeraq and if we see that the ones in charge do not have a capacity to lead this country, we will come up different plans.”

The criticism showed some scrapes in the so far good cooperation between the two political leaders since the election of president Bihi.

Where would the mediation process of Djibouti between Somaliland and Somalia lead to?