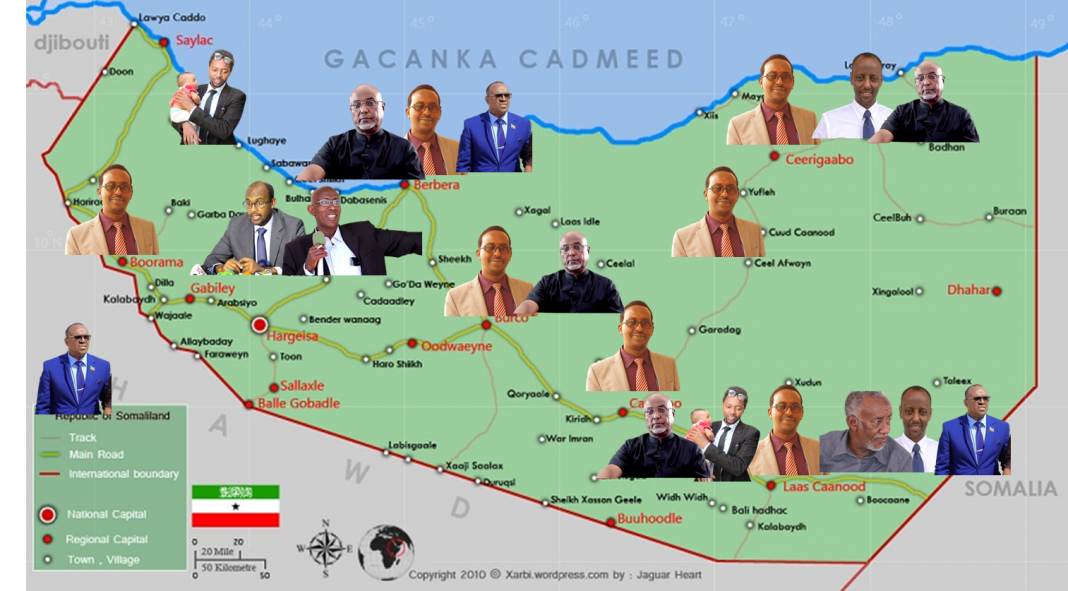 In this series, we will examine the impact of constant road trips by Somaliland government officials who often travel in large convoys to the furthest reaches of Somaliland to ‘supervise’ or cut the ribbon on a project.

While work-related travel is not at all unusual for any business including the government, in the Somaliland government it creates a level of disruption that keeps government agencies from reaching their full potential and closing the glaring gaps in public service delivery.

In the last three months, almost all the Ministers in President Bihi’s cabinet have undertaken some sort of work-related travel within the country. Some, like the minister of Health Development, Hon Omar Ali Abdillahi travel more frequently and has been on the move for the last two months, crisscrossing the entire country in a convoy of 5 vehicles and more than 20 people entourage.

Below is the travel log of the Minister of Health Development Hon. Omar Ali Abdillahi.

Although every ministry employs an army of administrators at every region and district in Somaliland, for some reason, ministers and other government officials in Somaliland find it necessary to personally travel at times to break the ground of a new government project, hold a meeting with regional officials, supervise an ongoing work or simply attend a ribbon-cutting event.

The Minister of Health Development Hon. Omar Ali Abdillahi has traveled the entire country from coast to coast, perhaps justifiably due to COVID-19 pandemic, but what the Ministry has put out publicly on the Minister travel does not reveal a major restructuring, staff changes or reorganization of the Ministry that would require the Minister to embark on a two-month-long trip costing taxpayers tens of thousands of dollars.

After such a lengthy mission is undertaken by a government official, there is never a report that details the outcome of the travel and what was accomplished.

The Minister of Health Development Hon. Omar Ali Abdillahi is by no means the only one with extensive travel, the map above illustrates a fraction of the travels undertaken by government officials in the last two months.

Some trips posted by officials online do not seem to entail any work at all, while public resources and time are clearly being used. One such trip was undertaken by a delegation led by the Director-General of the Ministry of Education and Science Mr. Ahmed Abokor to Saadadin island. There are no inhabitants on the island and no schools.

Another reason that keeps government officials, especially ministers constantly traveling is their unofficial duty as peacemakers or tribal elders. Case in point, the Minister of Interior Affairs Hon. Mohamed Kahin Ahmed and a delegation of ministers have been in Sanaag for months as part of the government’s effort to prevent the tribal conflict that has plagued the region for years.

This is the second such trip by the Minister of Interior Mr. Mohamed Kahin Ahmed to Sanaag where he previously led a similar large delegation of ministers only for the violence to return.

At this very moment, the minister of Information and National Guidance Hon. Saleban Ali Kore and the minister of Foreign Affairs and International Cooperation Hon. Yasin Hagi Mohamoud Hiir (Faratoon) are in Sool working on resolving yet another tribal conflict.

It has been a common practice by successive Somaliland governments to send officials to their ancestral lands to work with traditional elders to solve conflicts and although generally successful and while a mission to bring peace and preserve life is an absolute necessity, these efforts fail to produce policies or studies on the underlying issues to help prevent future conflicts.

One may argue that government entities have the structural resilience and can function if the minister is away, after all that is the function of a deputy but unfortunately, many officials who spoke on background, describe the issue of delegation in many ministries as nonexistent. One described the process of a minister being away as a classroom without a teacher and that most of the work screeches to a halt.

One effect of constant trips by ministers are power vacuums were deputy ministers and director generals try to make as many changes as possible, issue directives, or even enter into new agreements while the minister is away.

The result is widespread conflict among government officials that is on full display on social media.

Just recently, the Minister of Justice Hon. Mustafe Mohamoud Ali Bile suspended the authorized signature of the Director-General Mr. Abdirahman Sh Hassan Ismail for widespread staff conflicts and overstepping his legal authority and signing agreements with private parties. It is worth noting that the Minister of Justice has been a way to Eil Afweyn for an extended period of time as part of Minister Kahin’s peace delegation.

Although some travels are necessary, especially the peacemaking ones undertaken by ministers, the truth is the majority of these travels are unnecessary and a simple conference call or video call which President Bihi has been using to convene his cabinet since COVID-19 would suffice.

So why do these officials travel? According to several sources, some current government officials who spoke to the condition of anonymity, local travel or hospitality is simply another method of misappropriating public funds without raising eyebrows.

Somaliland government agencies spend hundreds of thousands of dollars in banquets and receptions in major hotels in 2019.