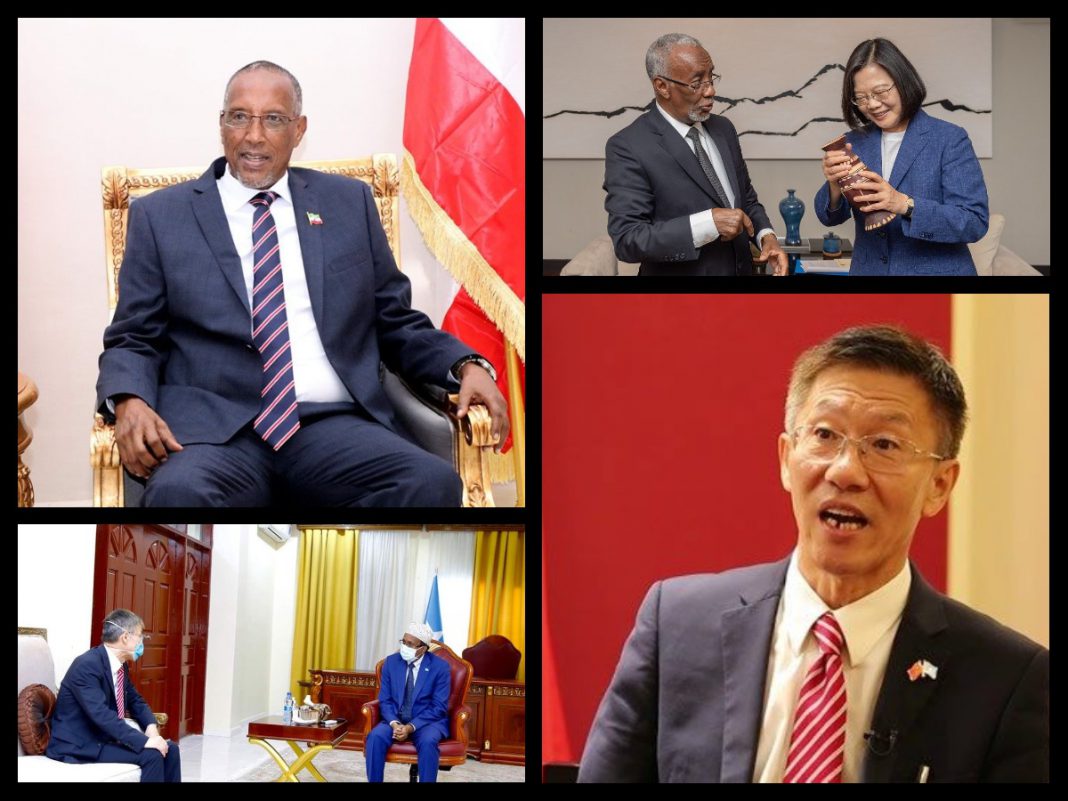 According to multiple sources, the Chinese Ambassador in Somalia Mr. Qin Jian visited the Republic of Somaliland twice to try to convince the Somaliland government to cease its activities with Taiwan.

The first visit was shortly after a delegation from the Ministry of Foreign Affairs and International Cooperation returned from a trip to Taiwan earlier this year and a more recent trip.

The Chinese Ambassador in Somalia Mr. Qin Jian met with the Minister of Foreign Affairs and International Cooperation Hon. Yasin Hagi Mohamoud Hiir (Faratoon) and President Muse Bihi Abdi to discuss the People’s Republic of China’s offer to Somaliland and ongoing work on establishing diplomatic relations between Somaliland and Taiwan.

Sources state that the Ambassador and another official from the Chinese Embassy in Mogadishu offered to open a Chinese Liaison Office in Hargeisa if Somaliland halts all activities with Taiwan.

The Chinese Ambassador spoke at length of the People’s Republic of China’s view towards territorial integrity as it relates to Taiwan before he presented the offer to open an office in Hargeisa.

For his part, Minister Faratoon told the Chinese delegation that Somaliland welcomes all nations including China but declined the request to stop working with Taiwan.

President Bihi who was briefed on the Chinese offer met the delegation briefly the following day. According to sources at the meeting, President Bihi rejected the offer of a Chinese Liaison Office in Hargeisa.

Minister Faratoon confirmed the visit by the Chinese Ambassador and the meeting with him and President Bihi.

On July 1st, Somaliland and Taiwan governments have announced formal diplomatic relations between the two countries and exchanged representatives.

There is strong bipartisan support for Taiwan in the United States Congress and the US government considers it a vital strategic partner and there are legislations in congress to re-establish Mutual Defense Pact to protect Taiwan against a Chinese invasion. The United States Embassy in Somalia, based in Nairobi had no comment on the newly announced diplomatic relationship between Somaliland and Taiwan.

After a meeting between the President of Somalia and the Chinese Ambassador Mr. Jian, today in Mogadishu, Villa Somalia released a statement to denouncing Taiwan’s establishment of diplomatic relations with Somaliland as a violation of its sovereignty and territorial integrity.

It is unclear if Somalia will take action against Taiwan or is aware of the Chinese government’s offer to Somaliland to establish a Liaison Office or if Mr. Qin Jian discussed his meeting with Somaliland Government with President Farmaajo.

What are false flag attacks – and could Russia make one work in the information age?