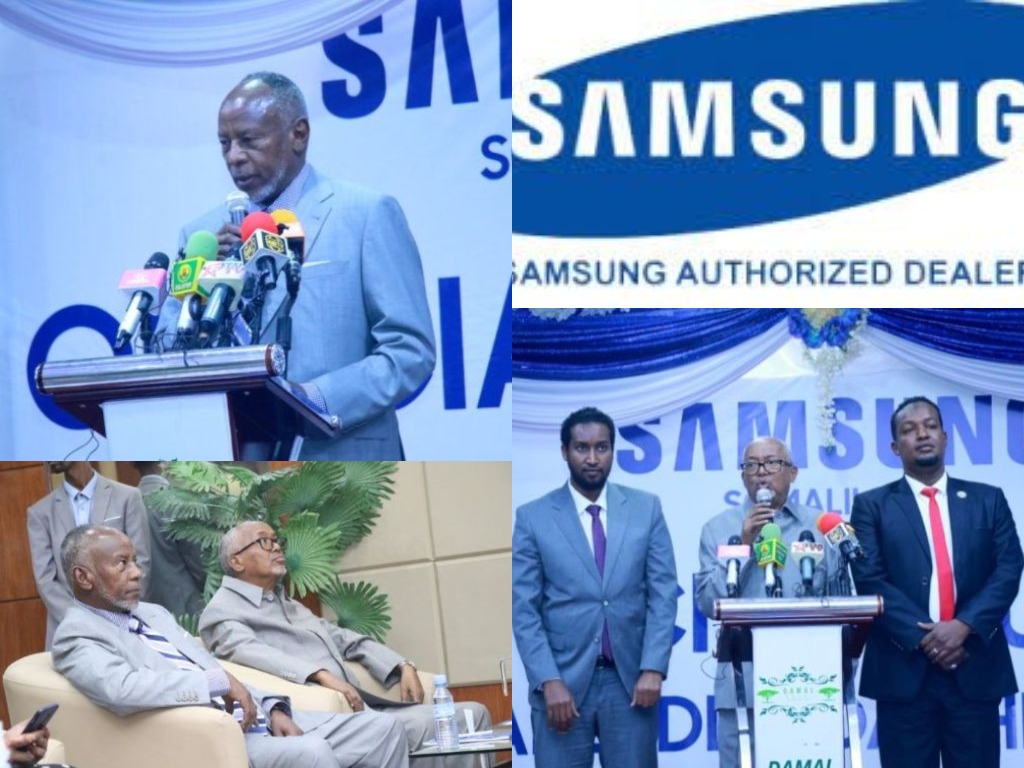 On October 22nd 2019, the Vice President of Somaliland HE Abdirahman Abdallahi Ismail Saylici inaugurated a flagship SAMSUNG store in Hargeisa.

Also in attendance at this glitzy unveiling event was the well-known business tycoon, the Chairman of Dahabshiil Group Mr. Mohamed Saeed Dualeh arguably the wealthiest man in Somaliland.

From Somaliland government, there were the Ministers of Investment, Employment Family and Social Affairs, the Deputy Minister of Finance, the Chairman of Chamber of Commerce, the Director General of the Presidency and Hargeisa Deputy Mayor Mr. Abdiasis Mohamed Hashi “Agaweyne” and many well-known personalities including the former Minister of the Presidency and the Leader of Waddani Opposition party, Mr. Hersi Haji Hassan.

It is not unusual for government officials to attend the opening ceremony of local businesses and especially one that belongs to one of the largest corporations in Somaliland – Dahabshiil Group.

Just a month ago Dahabshiil Group has opened a Hyundai car dealership that was inaugurated by President Muse Bihi Abdi and attended by chairmen of the opposition parties Dr. Abdirahman Mohamed Abdullahi Cirro and Eng. Faysal Ali Warabe.

There is something that stands out about Dahabshiil Group’s venture into retail electronics with its flagship SAMSUNG Somaliland store in Hargeisa, it does not seem to be an official SAMSUNG store, because, unlike Apple, Samsung has only recently launched its retail space with its SAMSUNG Experience stores and there are only a handful of these so far and Dahabshiil Group’s electronic store in Hargeisa is not one of them.

In Africa, there are five countries with SAMSUNG Experience Stores, these are Ghana, Nigeria, Mauritius, Kenya and Zambia.

We could not find information on the purported partnership of SAMSUNG and Dahabshiil Group anywhere outside of the event and its media coverage in Somaliland, however, we have located somalilandsamsung.com poorly designed and insecure e-commerce website that seems different from the official SAMSUNG sites that shows an attempt to make it look authentic with SAMSUNG logo.

samsungsomaliland.com is hosted on GoDaddy.com and is designed on an open-source ERP platform known as Odoo. Something SAMSUNG would probably not use.

In this case, Dahabshiil Group has used the Somaliland government to endorse its electronics store and portray it as a major milestone in Somaliland’s development and economic growth by partnering with SAMSUNG, when it in fact opened just another electronics store.

It is easy for a business to become an Authorized Dealer, this is the primary channels that many companies use to sell their products but the claim that Dahabshiil Group has partnered or is operating an official SAMSUNG store in Somaliland is deceptive marketing that dupes the consumer into thinking this is the store with authentic SAMSUNG products.

What the government has done is give Dahabshiil Group an unfair advantage over similar businesses and inadvertently declare every SAMSUNG product sold in Somaliland as a potential fake unless purchased from Dahabshiil Group’s store.

This will negatively impact many small businesses, some that may only have few phones in stock to sell to raise families.

To be fair, SAMSUNG phones are the most copied and there is high probability that Somaliland is awash with fake phones.

Dahabshiil Group did not respond to our question on whether it will be the only authorized dealer of SAMSUNG products in Somaliland and if the warranty is through a third party or is covered by SAMSUNG.

The first issue is the fact that Dahabshiil Group is claiming to have brought SAMSUNG, the Korean manufacturing giant into Somaliland, a claim that has been repeated by almost all the officials that attended the unveiling event including the Vice President. This is simply false.

The Chairman of Somaliland’s Chamber of Commerce, Mr. Jamal Aideed Ibrahim even went as far as linking the electronics store as a tacit recognition of Somaliland by SAMSUNG.

There is also the claim that this store will directly contribute to Somaliland economy and could create jobs, a claim that most of the officials on stage vaguely touched on without specifying how a single store will do that.

Dahabshiil Group is a private company that is profit-driven and is under no obligation to divulge its secret sauce and convince the public how its businesses will benefit the nation at large. This could explain the lack of specificity in the potential effect on job creation and the economy.

Cellphone and other consumer electronics sold by one store will not make a difference to Somaliland’s economy and will create perhaps fewer than 30 jobs.

A boost to Somaliland’s economy would be if a company like Dahabshiil Group got into commercial fishing for export for premier markets such as Japan. Or perhaps get into the attractive industry by restarting the Berbera cement factory that was handed over to Dahabshiil Group back in 2017.

There is nothing illegal about having the Vice President or the President attend and cut the ribbon from a new business in Somaliland, at least there are no laws against it, but with Dahabshiil Group, the largest business in Somaliland muscling its way into every facet of commerce and potentially destroying small business along the way with the government’s help in the form of talking props is at the very minimum morally wrong.

Dahabshiil Group did not respond to request for information on its partnership with SAMSUNG and details about the store.

Steps to inoculate African economies against the impact of coronavirus