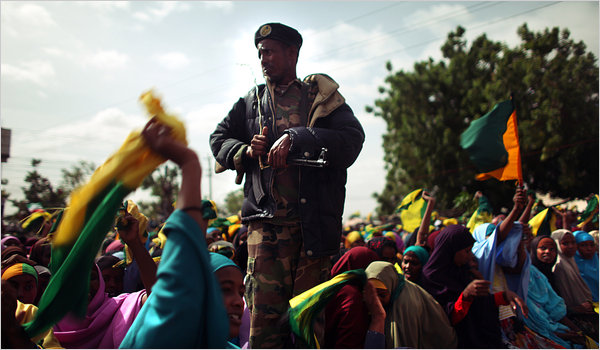 Lewis Center, Ohio—It’s a very rare in a male dominated and poverty stricken Somaliland for women to move head and run a business. But, a young woman worked hard and saved enough money to get a license to open for a 1,000 Sqft Warsan Ethiopian restaurant, in the dusty town of Burao. She even hired two female employees. However, last week, her dreams of serving the residents of Burao hit a wall after a local police SWAT team raided her business and shut down the restaurant, for failing to separate sexes. The police arrested her and the two of her employees, but they were all released later.

The local police were taking orders from a so-called Somaliland committee for the promotion of virtues and the prevention of vice (SCPVPV), which orchestrated the raid. This is un-elected religious zealots have kept a tight grip on the local government of Burao. The elected mayor, the police, the district attorney, and even courts are doing their bidding.

These religious vigilantes do mainly focus on harassing young women, people they do not like or who disagree with them or anyone they have a grudge against.

Somaliland has a lot problems that need to be addressed. We have rampant corruption in the business, faith and political leaders; the effect of chat and tobacco consumption on society, the problems of clan identity in our politics, and the allege sexual abuses and harassment or even rapes in the Madrasas or other school systems.Gender separation in the public is not one of them. The religious committee needs to focus things that will make the lives of ordinary people better.They should stop harassing women owned businesses.

Enjoining what is good and forbidding what is evil is not only the most important Islamic duties, but it also one the basic tenets of Islam.

In fact, in the Koran, Allah states, “Let there arise from you a group of people inviting to all that is good [Islam], enjoining Al-Ma’ruuf (all that slam 0rders), and forbidding Al-Munkar (all that Islam has forbidden). And is they who are the successful.” [ Al-Imran, 3:104]

I am not questioning their motives, but what is the troubling to me is the manner the members of the committee of promotion of virtues and prevention of vice conduct themselves on their mission of spreading the good and warnings against the evil things.

Instead of calling people with wisdom and fair preaching, as Prophet Mohammed (SWT), used to do, they’re using a brute police force—which reminds many people the Faqash era repressive tactics. We just liberated the country from a vile dictatorship. Most people still remember midnight raids of the para-military police force and the abuses of the savage “Guul-wadayaal.”

Also, with the aiding and abetting of the local government, they banned from local hotels, restaurants and shopping places, events where gender were not separated. They also banned music and even Somaliland national anthem from all venues.

For instance, on October, 2013, the popular Somaliland band, The Horn Stars, planned to stage a concert with all ticket sold out at local hotel in Burao. Unfortunately, the event turned into mayhem: A group of paid thugs from religious committee smashed most of the vehicles at the parking lot of the hotel, and 9 people were injured. The police never interfered or arrested anyone regarding the injuries people suffered or the destruction of the properties.

Who is to make decision or laws about behaviors that is acceptable or forbidden ‘Haram’ under sharia-law: Our legislature or a brazen remnants of the Islamic Courts group?

In Somaliland, do we have on the books laws or statues requiring gender separation in all public places, including restaurants, shopping or work places?

For the sake of this argument, if we have laws requiring gender separation, then the young lady is violated our laws. Consequently, she must comply the law if she wants to continue to operate her restaurant. Period.

However, as far as I know, there are no laws in Somaliland,  requiring gender separation in public places or banning playing music at weddings ceremonies—the most important event in a human event other than a birth of child or other social gatherings.

In Burao—what we got is a complete breakdown of the chain of the command of the police. The Burao police have been compromised like the way organized crime syndicates infiltrate local police force.

It is prudent for the Interior Minister, Col. Kahin, who hails from East Burao, and the commander of the Somaliland police force, to do a complete thorough investigation how a fanatic religious committee took over the whole Burao city government and the police unit.

There must be accountability; we can’t compromise national security matters. If the Interior Ministry fails to shut down this brazen militant group—many people would assume that they’re a state- sanctioned organization.

There are reports that it receives funding and guidance from the Ministry of Religious affairs. More troubling, there are also credible allegations that it got funding from foreign entities as well as businesses, which used to finance remnants of the Islamic Courts and al-Shabaab.

The Agenda of the emboldened religious militant group is bigger than taking over the Burao city government. They have branches all over Somaliland towns and villages. They do not believe our constitution; they hate our system of government, our flag and our country. They’re very determined to bring down Somaliland and takeover our government under the guise of protecting Islam or clan identity.

The thuggish religious committee is not only abuses women, but it also the reason why many from Burao area in the diasporas have decided not to settle or open business in their home city.

However, I am praying for them to change their behavior and conduct because our faith is a religion of mercy, and Allah is the most merciful. But we must not be complacent against those who are trying to harm Somaliland. We must stop them before their narrow Wahabi interpretation of Islam poison the rest of the country. We must also be vigilant and protect our freedom because Somaliland is under siege.

About the Author
Ali-Guban Mohamed is a freelance Journalist and the
Editor of Gubanmedia.com. He is based out of Lewis Centre, Columbus, Ohio.