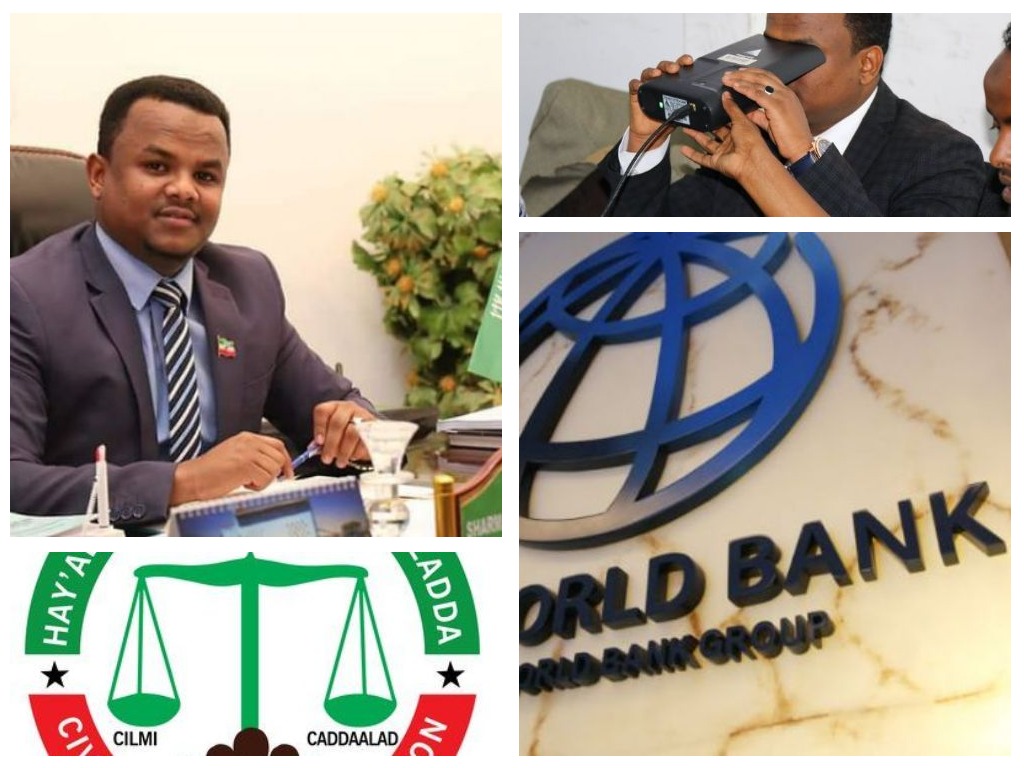 In November 2016, the Former Chairman of the Civil Service Commission Mr. Sharmarke Geele and officials from the World Bank unveiled an ambitious 10 million dollar project funded by the World Bank.

The project, known as the Somaliland Civil Service Reform Project is part of the Somalia Multi Partner Fund and is intended to strengthen basic functions for payroll, human resources and policy management in selected central government agencies and line ministries.

This project is as complex as the Public Financial Reform project also funded by the World Bank.

Mr. Geele has been in charge of Somaliland’s Civil Service Commission since August 2016, before that he has held two other government jobs where he worked as a Secretary for Mr. Hersi Haji Hassan, the former Minister of the Presidency and later for his successor Mr. Mohamoud Hashi.

Mr. Geele’s appointment as the Civil Service Commissioner happened less than two months after the project was approved by the world Bank.

In a lavish ceremony Mr. Sharmarke has announced a major milestone of the project including the start of the head count of government employees and its conclusion.

In this report, we want to inspect the figures made available by the World Bank on this project to understand how much, where and what the funds were spent on.

Close to 4 million of the project budget has been spent so far; this is according to public records made available by the World Bank.

The expenditure data of this project shows that 55% or of the four million dollars went to Kenyan nationals for consultation services and even more interesting, half of the two million spent on Kenyan consultants went to just two entities.

One is Mr. Philip Mwangi who was paid $520,000 for his consulting work on Staff Retention, the other is Extra Insight coming in at $566,700 for headcount activity.

It’s unclear if the Civil Service Commission has sought any advice from the many higher education institutions in Somaliland for talent to help develop the policies that seem to have been developed exclusively by Kenyan Nationals.

One that stands out as suspicious in the list above is Mr. Philip Mwangi and the sum of $520,000.00 paid for his services on Staff Retention since there are other tasks listed that seem to have cost the project much less than the sum paid to him.

According to sources with an intimate knowledge of this project, the expats used in this project were generally recommended by World Bank employees in Nairobi.

Corruption in the form of sophisticated kickbacks have been reported in World Bank projects in the past, one of which took place in Kenya where millions intended for micro-finance disappeared.

Though the Somaliland Civil Service Reform Project has been well publicized and the CSC Chairman has been adept at ensuring positive media coverage for himself, the net result of the project that has cost roughly 40 percent of the allotted 10 million funding falls short of the overall project objectives.

One of major achievements of the project is the physical headcount where the CSC has visited every region of the country and biometrically registered all government employees and has issued them identification cards. This effort has netted 1,252 ghost workers.

Despite all the CSC efforts, it has failed to implement a human resource management system and without such a system, ensuring government workers show up for work and their performance, leave and future talent acquisition tracking is an impossible task.

One of the few tangible assets acquired as part of this project is the biometric registration equipment, comprising a fingerprint and a retina scanner at a whopping $96,000 for six units. Despite the infallibility of biometric identification, it’s unclear if future phases of the project include fingerprint scanners at government offices.

Another area of concern is the safeguarding of the data that has been collected since it is more than personally identifiable information and contains biometric information, it’s unclear if any measures to ensure proper encryption and security of this sensitive information are in place.

On March 30 2019, President Bihi has removed Mr. Geele from the Civil Service Commission and appointed him as a Deputy Representative to Kenya. No official reason was given for Mr. Geele’s reassignment.

Dr. Saad Ali Shire, Minister of Finance referred all question related to this project to the Civil Service Commission.

Request for comment to the former and current Commissioner of the Civil Service seeking clarification on how these were not answered.