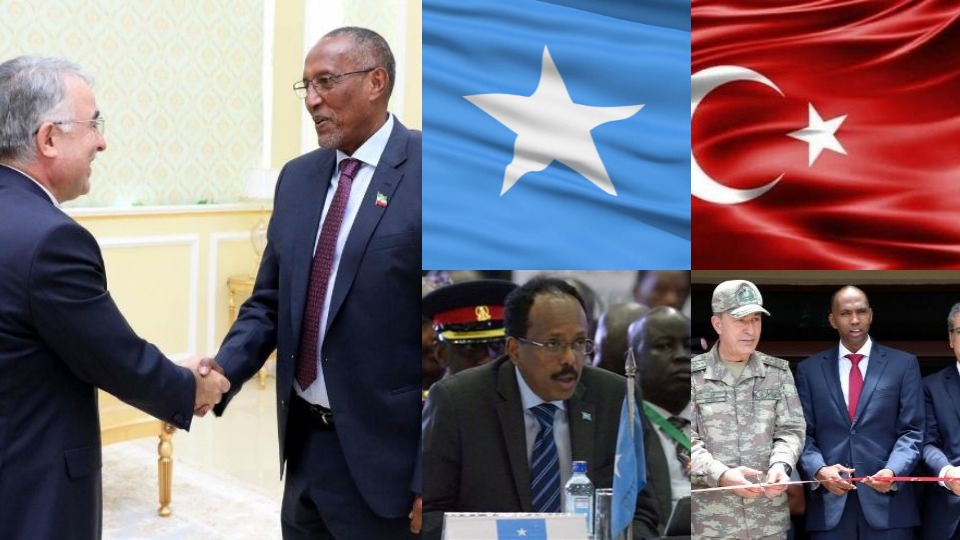 In this report, we are examining Turkey’s history in Somaliland and Somalia and their role as mediators in the past talks.

Turkey is not the only country interested to have Somaliland and Somalia get back to the negotiating table and reach some sort of a settlement.

The topic has come up during President Muse Bihi Abdi’s meeting with the Ethiopian Prime Minister in Addis Ababa this week though it is unclear the extent to which they discussed the subject or if any concrete steps to get the two sides talking were agreed upon.

It is important to understand that various stake holders have different expected outcomes of such talks and Somaliland might be the odd man out as it seeks to gain an amicable completion of its divorce from Somalia.

According to statement from Somaliland Presidency following President Bihi’s meeting with the new envoy Dr. Bekar on February 9, The President informed Dr. Bekar and the Turkish delegation that since past talks has not yielded any results all future dialogue between Somaliland and Somalia must include the international community.

Sources from Somaliland’s Ministry of Foreign Affairs and International Cooperation present in the meeting with the President and the Turkish delegation stated that President Bihi also informed the Turkish envoy that bringing a level of balance in how Turkey invests in Somalia and Somaliland is a good way to show Somaliland that Turkey is impartial and a friend to Somaliland.

To understand if Turkey can be an impartial and an honest broker on Somaliland and Somalia talks and its general standing in the world community, we have spoken to Mr. Michael Rubin who is a resident scholar at the American Enterprise Institute, where he researches Arab politics, the Gulf Cooperation Council, Iran, Iraq, the Kurds, terrorism, and Turkey.

Somaliland Chronicle: Do you think it is wise for Somaliland to accept Turkey as a mediator in Somalia talks given the Turkish Gov support and massive investment in Somalia?

Mr. Rubin: Turkey does not have a track-record as an honest broker, and President Erdoğan has an ideological agenda which does not value Somaliland’s democracy and security. It is crucial to broaden any such mediation beyond a single country.

Somaliland Chronicle: In your latest article you wrote about Turkish support for terrorism and specifically for Al-Shabaab. What is Turkey’s reasoning for supporting Al-Shabaab?

Mr. Rubin: There is no single international definition of terrorism, and so Turkey often says it is combating terrorism, but denies groups like Al-Shabaab in Somalia or Al Qaeda in the Islamic Maghreb in Mali are terrorists. Erdoğan’s goal is a more Islamist order. His fault, though, is confusing some Islamist movements with Islam itself.

Somaliland Chronicle: President Bihi recently met with a Turkish Envoy in charge of the Somaliland/Somalia talks, do you see any value in having Turkey to mediate or be part of those talks?

Mr. Rubin: Certainly, there is value in consultation with Turkey, as Turkey retains a diplomatic presence in both Somalia and Somaliland. President Bihi is correct, however, to seek a broader mediation rather than reliance on a single country.

As President Bihi informed the Turkish delegation, there is an imbalance in how Turkey provides and and invests in Somaliland and Somalia. Let’s break down what Turkey so far done in is to Somalia:

Turkey is Somalia’s true patron state, one of its most expensive efforts is to rebuild the Somali National Army from scratch and in its own image.

The 1.5 square mile Turkish military training installation is capable of churning out 1,500 fully trained and equipped soldiers at a time. This is according to Turkish and Somali sources familiar with the facility.

Below is a tweet from Turkish Embassy in Somalia showing images of Somali military personnel being trained in Turkey.

While Turkey rates as the 18th largest military in expenditure globally, it has a fledgling arms industry and rebuilding the Somali National Army represents a lucrative opportunity to supply it with the equipment it is manufacturing.

According to a recent VOA report, in what seems to be a clear violation of the United Nations Security Council’s weapons embargo on Somalia, Turkey has been supplying armament to units of the Somali National Army it has been training.

Since September 21, 2014 Albayrak Group has been operating the Mogadishu Port on a 20 year concession where the company takes 45% of all revenues from the port.

Public records show that Albayrak Group does not have a track record in managing world class ports, besides Mogadishu Port, it also manages and the Trabzon Port in the Black Sea on Turkey’s Northern border with Georgia.

Compared to Albayrak Group and the 2 ports it manages, DP World manages about 77 marine and inland terminals including Somaliland’s Berbera Port.

Other Turkish conglomerates such Enez-İnşaat and Kozuva Group are also active in Mogadishu.

Here is the Somali Prime Minister Mr. Hassan Khaire thanking Qatar for funding road networks between Mogadishu, Afgoye and Jawhar and also thanking the Turkish Government, presumably Enez-İnşaat who according to him have “won” the contract to build said roads.

Turkey bills itself as Somalia’s rescuer and multiple visits by Erdoğan to Somalia especially in what is considered a relatively difficult time for the Somali people were designed to convey that exact message but economically, Turkey stands to gain more from Somalia and Mogadishu than it lets on.

According to some estimates, the most profitable route in Turkish Airlines is the Mogadishu – Ankara route. And aside from the large visible projects, there are tens of thousands of Turkish citizens living and working in Mogadishu.

Despite the obvious economic gains Turkey is making in Somalia, it is gearing up to do even more business in that war-torn country.

Getting involved in one of the least stable country in the world, Turkey is employing the concept of first mover advantage. This means less competition from the Chinese and other actors vying for influence in Africa.

Turkey heavy bet on Somalia and specifically Mogadishu is yielding economic results for Turkey beyond what Erdoğan has expected. In fact, Turkey’s largest embassy in the world is not where you would expect, like Washington DC, Brussels or Berlin, it is in Mogadishu, Somalia.

One of the most attractive features of Turkey’s patronage of Somalia is it is non-interference posture in Somalia’s domestic politics. It is worth nothing that Somalia ranked lowest in global corruption index and any country that is willing to look the other way is a welcome reprieve from the usual admonishment for President Farmajo’s weak administration.

The most visible contribution of Turkey to Somaliland is a recent 216 medical machines donated by TIKA, the Turkish aid agency to Hargeisa Group Hospital.

Although this particular instance has been widely publicized by TIKA, Somaliland Chronicle has been unable to locate anything of note done in Somaliland either by Turkish Government or it is aid agency TIKA.

There are, however, multiple unfulfilled pledges by the Turkish Government in the past to help build roads in Somaliland according to multiple former and current Somaliland Government officials. None of these pledges have materialized.

One thing of note is that Turkey has been particularly adept in dangling a carrot of aid and development or simply inviting them to Istanbul on a whirlwind of meetings and tours to get them to buy into the importance of Somaliland and Somalia talks.

No other country has put so much effort to try to mediate Somaliland and Somalia as much as Turkey. In fact, this might be the only thing Turkey has done in Somaliland. There were many rounds of talks that hosted by the Turks in the past and personally supervised by President Erdoğan himself, unfortunately, these talks have been a disaster for Somaliland.

Turkey’s obsession with Somaliland is rooted in the simple fact that the rift between Gulf states of UAE and Saudi Arabia on one side and Qatar, Turkey and Iran on one side has been playing out in Somaliland and Somalia.

The United Arab Emirates base in Berbera and DP World managing the Port gives the UAE and its ally Saudi Arabia an advantage and a foothold in the strategic 850 kilometers of Red Sea coastline with a direct access to Bab Al-mandab.

Turkey and Qatar has been spending heavily in trying to unseat the Emirates from both the military base and the Berbera Port by mobilizing the Somali government to oppose these deals. Additionally, Turkey has been advancing particular talking points that have been seeping into public discourse in Somaliland such as the importance of Somaliland – Somalia talks, the ramifications of hosting a foreign army in Somaliland via the UAE base and the deterioration of service at the Berbera Port. These same exact talking points are parroted by many civil organizations and opposition parties in Somaliland.

Somaliland has repeatedly signaled it’s willingness to talk to Somalia but its demand for the international community including the United States, United Kingdom and the European Union to get involved and President Bihi’s impossible task for the Turks to raise their level of support for Somaliland to something comparable to Somalia’s almost guarantees that Turkey’s role will be a lot smaller in future dialogue between the two countries.