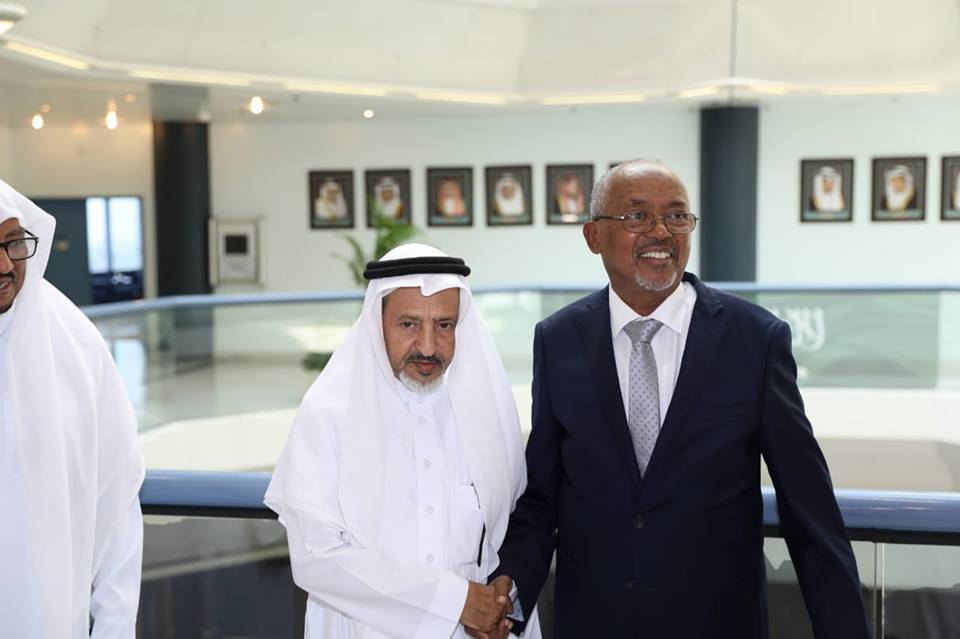 Somaliland Vice President HE Abdirahman Abdallahi Ismail Saylici and a high level delegation consisting of ministers and members of the opposition parties met with Saudi investors and commissioners of the Jeddah Chamber of Commerce. Saudi Arabia’s oldest chamber of commerce established in 1946.

Vice President Saylici extended an official visit to the Jeddah Chamber of Commerce and the Saudi investors to come to Somaliland to evaluate the multitude of investment opportunities including agriculture, fisheries and livestock export.

According to Saudi Arabia’s General Authority for Statistics, Somaliland and Somalia have done 759 Million Dollars worth of exports to the Kingdom in 2016 – All in livestock.

Saudi Arabia is one of the largest economies in the world and opening up a fraction of it to Somaliland in direct trade for fish and seafood will have a huge impact on Somaliland’s economy.

Somaliland’s proximity to the Kingdom is another strategic advantage over other farflung trading partners such as Brasil, New Zealand and Australia which are its top trading partners for livestock and other meat products.

Additionally, Somaliland’s peace and established rule of law makes it much more attractive relative to Somalia where supply of livestock to the Kingdom are routinely disrupted by ongoing hostilities.

President of Somaliland HE Muse Bihi Abdi has set development of livestock and fisheries as a national priority and any possible investment and effort to expand exports to Saudi Arabic will require proper veterinary and introduction of commercial fishing to Somaliland to meet the demand from the Kingdom and avoid past issues where the Saudi’s unilaterally banned livestock imports from Somaliland.

The meeting with the Jeddah Chamber of Commerce follows the Vice Presidents completion of Hajj in Mecca where together with leaders of the Muslim world he met with King Salman bin Abdulaziz Al Saud.

The optics of Vice President shaking hands with the King was a much discussed event that many Somalilanders saw as yet another sign of being accepted into the fold of world nations however unofficial.

Somaliland has enjoyed a sporadic diplomatic glimmers of hope from the United Arab Emirates following the signing of the DP World and the Berbera Airport deals.