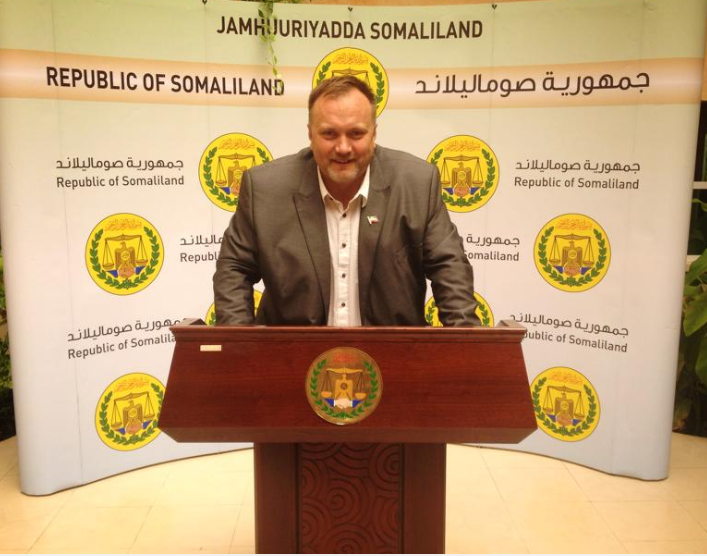 Mikael Thorstensson is a Swedish citizen and a businessman, he is from the small Vrigstad town in southern Sweden with a population of less than 2000. While there is a lot of information about him and Somaliland, we are going to dig a little deeper than usual. Hold on to your hat!

A Web of Business and Humanitarian Activities

While Copy Vision AB does not any have dealings in Somaliland (more on that later), Swedinvest Scandinavia, Mr. Thorstensson’s marketing material state that it is setup to bring investment to the Horn of Africa and particularly Somaliland. The launch of Swedinvest Scandinavia in 2015 was a high profile event that was attended by Somaliland’s Vice President Abdirahman Saylici.

Aside from a many promotional materials, the only thing we could find was a photo of a truck with the Somaliland and Swedish flags as well as the Swedinvest Scandinavia crest. The purpose of the vehicle is unclear but it appears to be an old decommissioned military vehicle with a white paint.

Mr. Thorstensson’s activities are all tightly intertwined, for instance Swedinvest Scandinavia is listed as a partner of the Charity School of Dreams for the disabled children he runs with his wife Elisabeth in Borama, though the nature of the partnership is not clear. Additionally, the website for the school is hosted by Copy Vision AB. This is a name you will see many times through out the story.

In fact, all the partner entities listed on the School of Dreams website are owned by Mr Thorstensson’s Copy Vision AB.

The School of Dreams‘s website solicits direct donations from the public via e-Dahab, Zaad and Swish, a Swedish mobile money transfer service. Close inspection of the swish account listed for donation reveals that it is linked to is a personal account owned by Mr Thorstensson at Swedbank och Sparbankerna.

Beyond the slick website and pictures in classrooms and on one occasion, Mr Thorstensson’s children pose in pictures with disabled children, we are unable to verify the schools’s operations, how many kids are enrolled or the type of services provided to disabled children.

While Mr Thorstensson has cultivated an image of a successful international businessman, his finances tell an entirely different story of loss, unpaid rent and eventual eviction from his Hargeisa residence. According to tax records filed by Mr. Thorstensson for Swedinvest Scandinavia and Copy Vision AB have consistently lost money.

No doubt a busy entrepreneur and a humanitarian but that is not all. He also holds a portfolio as Somaliland’s Special Envoy to the EU.

Mr Thorstensson has a rather an unusual relationship with Somaliland, and some might even call him the ultimate insider with powerful friends in high places, this is an image has has worked very hard to cultivate as shown on his facebook and other public sources. Including this bizarre interview, where he is answering questions that are seemingly not asked by the reporter.

Even though Mr Thorstensson calls himself Somaliland’s Special Envoy to the EU, it is very important to note that during the appointment, Somaliland’s Foreign Affairs Minister HE Saad Ali Shire, has made it clear that Mr Thorstensson was not an Ambassador for Somaliland but rather an honorary envoy. It is unclear what this means as we were unable to find official government records to understand the parameters of the appointment.

Mr Thorstensson has frequently touted his connection to the Swedish Government, the only link we are able to find is between him and a parliament member from his small town of less than 2000 people,  Mr Magnus Oscarsson who appears frequently with Mr Thorstensson and even visited Somaliland with him on few occasions.

In article that appeared on Vision Hoglandet which is owned by Mr Thorstensson and is one of the partner entities listed for School Of Dreams. Mr Oscarsson interviewed and is photographed with a group of six children who do not seem disabled in a sparsely furnished classroom.

We have reached out to members of the Somaliland Diaspora Recognition Committee in Sweden to ask them about their impression of Mr Thorstensson and Oscarsson and while none of them would speak on the record they were unanimous in how much power they saw Mr Thorstensson wielded within the government Somaliland even though he was merely an honorary envoy. For Mr Oscarsson, one described him as “simply a bored guy who would’nt mind a paid trip to an exotic location”.

“When the guy who seemingly has no clear role or qualification to represent Somaliland at any capacity let alone the European Union is meeting the President and dining with the Vice President of Somaliland you generally do not stand in his way even though he is clearly in it to promote his own interest but if he mentions Somaliland every now and again, we are good with it” is how a member of the SKS group described Mr Thorstensson.

How Close is Sweden to Recognize Somaliland?

In a slickly produced video Mr Thorstensson announced that for first time in history “Today we had an historic day here in Stockholm, we established Parliament Organization for Somaliland in Swedish Parliament”.

There is only one issue with this extraordinary claim, there is no official Parliament organisation or a committee for Somaliland in the Swedish parliament. By all accounts this is a private organization with no association to the Swedish government that just happens to have three Swedish MP Björn Rubenson, Daniel Bäckström and once again Magnus Oscarsson.

While it is significant to have three members of any developed world’s parliament in an organization designed to promote and lobby for Somaliland in their parliament, of the three MPs only Mr Oscarsson has submitted a question to the Swedish Foreign Ministry asking if they intended to initiate the Swedish Government’s recognition of Somaliland as a sovereign state. The answer was unfortunately a simple No.

Again, while Mr Thorstensson is not an official envoy of the Republic of Somaliland but rather an honorary, he has generously helped himself with emblems of the Republic of Somaliland and runs few Facebook pages one of them is Celebrate Somaliland which uses the logo of the Ministry of Foreign Affairs complete with promotional material and blurbs about him in the media, some of which are once again, Mr Thorstensson’s own Vision Hoglandet magazine.

Perhaps the most blatant example of Mr Thorstensson misrepresenting himself as an official Ambassador for Somaliland is yet another website, a rather slick site called somalilandabroad.se that purports to be Somaliland’s Diplomatic Mission to Swedan, Denmark, Norway, Finland and Iceland. Once again, designed and hosted by Copy Vision AB one of many businesses owned and operated by Mr Thorstensson.

It gets better, there is a section somalilandabroad.se about investment in Somaliland and it refers to a rather interesting entity known as European – Somaliland Chamber of Commerce with a rather striking logo but we are unable to locate the website listed and any other information regarding this entity. It is safe to assume is another one of Mr Thorstensson many tentacles.

Clearly, Mr Thorstensson is a conman using Somaliland’s desperation for recognition to use it’s name in a way that was not authorized to him and concocting embassies of his own out of thin air. What is worrying is that he might be taking funds from investors while pretending to represent Somaliland. Somaliland’s Ministry of Foreign Affairs and International Cooperation has in many aspects been an absentee landlord and the vacuum it created is where conman like Mr Thorstensson make their living.

Efforts to reach Messrs Thorstensson and Magnus Oscarsson have not been successful.