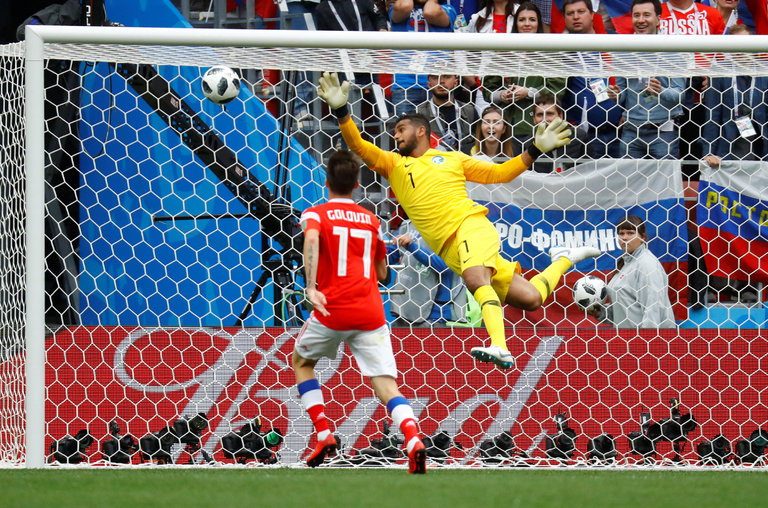 Russia comprehensively thrashed Saudi Arabia, 5-0, in the opening game of its home World Cup. Yuri Gazinsky scored on a header 12 minutes in, and afterward Saudi Arabia could offer little resistance.

[Need some help? Here’s a breakdown of all 32 teams. Here’s the World Cup schedule.]

Although the Saudis pressed in the opening moments, Russia created the first clear threat when Mario Fernandes crossed for Fyodor Smolov, whose shot was blocked.

And the hosts struck after 12 minutes when they forced another corner which was half-cleared and, when Roman Zobnin crossed, Gazinsky headed home the tournament’s opening goal.

Saudi Arabia were under increasing pressure and Smolov’s deflected strike was clawed away by keeper Abdullah Al-Mayouf when play continued after an offside had been missed.

But they threatened with 20 minutes gone when Yasser Al-Shahrani broke down the left and, from his cross, Mohammad Al-Sahlaawi’s header was deflected wide.

Soon afterwards, Russia were forced into a change when midfielder Alan Dzagoev pulled up with what seemed to be a hamstring injury and was replaced by Cheryshev.

Cheryshev was quickly into the action, racing from inside his own half before being dispossessed as he tried to shield the ball while support arrived.

Ten minutes before the break, Salem Al-Dawsari embarked on a dangerous run for Saudi Arabia but was crowded out, and moments later Russia appealed in vain for a penalty when Smolov went down under Osama Hawsawi’s challenge.

Cheryshev was in a dangerous position on the left of the area but ran out of space when it seemed the hosts could be about to double their lead. But with 43 minutes gone they did just that, substitute Cheryshev superbly getting away from a challenge and thumping his finish high into the net.

Neither coach made any changes at the break, with Russia’s Smolov the first to threaten in the second half with a deflected effort.

Saudi Arabia were continuing to give possession away easily and, from another concession dangerously close to their own area, Golovin fired over.

But the Saudis were close to pulling a goal back soon afterwards as a dangerous cross zipped through the area with Taisar Al-Jassim unable to get a telling touch. Salman Al-Faraj headed over from a free kick as the hour approached, but Russia goalkeeper Igor Akinfeev remained largely untroubled.

Smolov came off for fellow striker Dzyuba as Russia made their final change — and Dzyuba wrapped up the points with his first touch after 71 minutes when he took advantage of more poor marking to head powerfully home.

Roman Zobnin sent a header over soon afterwards — but Russia saved the best until last as Cheryshev swerved a glorious effort into the top corner with his right foot in added time, and there was still time for to Golovin to bend in a magnificent free kick in the closing seconds.