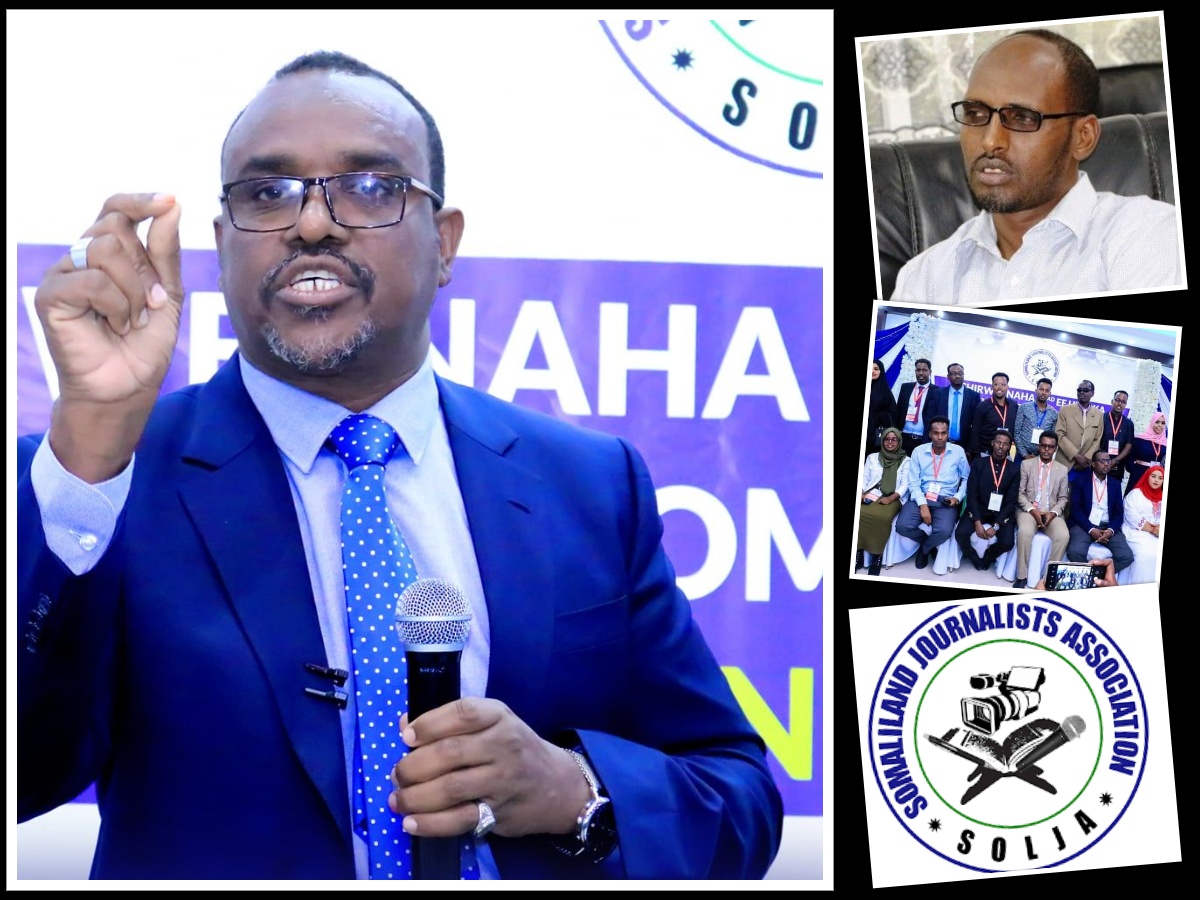 In the latest change of guard at Somaliland Journalist Association (SOLJA), the majority of board members including the newly elected chairman Mr. Zakaria Ahmed Mohamed are employees of the Ministry of Information and National Guidance.

The organizations’ stated goal is “SOLJA stands for Defense, Development, and Integration of Somaliland Journalists” according to the outgoing chairman Mr. Mohamoud Abdi Jama (Huto) but in its upcoming permutation that may be an issue since most of its current leadership report directly to the Minister of Information and National Guidance Hon. Saleban Ali Kore who in the recent past has had major issues with SOLJA and its stance on various directives he issued including a Draconian registration and demand of information from media houses that SOLJA has fiercely opposed.

Although the organization’s effectiveness has been questioned in the past and many of its former chairmen have moved on to high-level government positions, it has nonetheless been focal in its opposition to the arbitrary detention of journalists and issues detrimental to freedom of speech. The outgoing chairman Mr. Mohamoud Abdi Jama (Huto) is a candidate in the upcoming parliamentary elections.

In addition, SOLJA has strongly condemned Minister Kore’s action to shut down two television stations for failure to carry a live broadcast of the June 26th Independence Day festivities at the Presidential Palace. The TV stations have since been fined and reinstated.

The general assembly of SOLJA where the new leadership was elected was boycotted by a large number of journalists who condemned the process as rigged and have stated that they will establish a new umbrella that represents journalists.

This is not the only effort by the Somaliland government and Minister Kore to bring the media under government control, in 2020, the Ministry of Information and National Guidance has spent nearly 70,000 US dollars on various outlets for what it calls “defending Somaliland’s interest on social media“. The bulk of the funds went to few individuals and media outlets include Qaran News, Oodweyne News among others. Minister Kore decline to comment on the nature of the payment to these individuals and media outlets. Repeated calls to reach Mr. Kore were unsuccessful.

It is unclear if SOLJA, under the current leadership, will be able to advocate for Somaliland media professionals when detained by the government effectively putting them on a collision course with their employer but counter-argument by reporters who support the new leadership online points to the fact that the organization’s charter does not preclude government employees from leading the organization and that the Ministry of Information and National Guidance employs the most journalists in Somaliland.

Although successive Somaliland governments have cracked down on journalists, media freedom under President Bihi has been in steep decline, and the current Minister of Information and National Guidance Mr. Kore has been one of the most Draconian in stifling free media and the usurpation of SOLJA into government control may signal a desire to extinguish independent media and muzzle critical coverage of its activities.