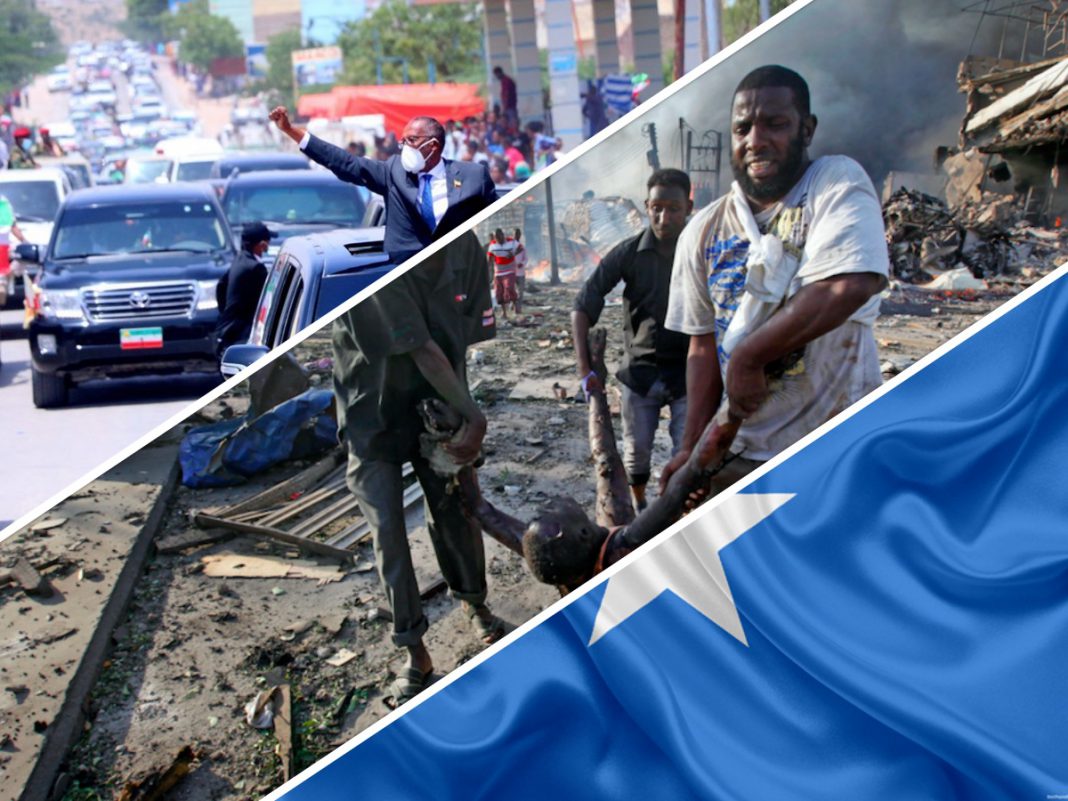 For the third time in its 30 years existence, Somaliland has once more restarted talks with Somalia this time with an inexplicable urgency and following a now apparent behind the curtain talks between Somaliland and Somalia leadership. Boom – President Bihi is all of a sudden flying off to Djibouti to sit across from Farmajo with the world listening. At least that is how the talks were supposed to be different this time around.

Off to a good start, President Bihi gave a speech about how Somaliland came to be. The bloodshed that its people suffered under the brutal Siad Barre dictator. The public was giving a collective standing ovation to the team and how well the talks are going so far, but then a string of conflicting and confusing messages that the negotiations have broken down streamed from Djibouti. An impasse and Somaliland’s delegation may be coming home.

The public is ecstatic that the team led by President Bihi is so fierce that they will walk away from the negotiating table, but in reality, the talks were still pressing on despite members of the delegation telling the media that the negotiations have hit a dead end. The emotional roller-coaster continues.

When it was all over, a statement issued from Djibouti with the words “between the two countries” was the latest catnip the public was gorging on before they lined the streets of the capital to get a glimpse of the hero who made it all happen perched on top of a Land Cruiser with his fist raised to the heavens.

Unfortunately, the festive environment was not meant to last as the mood was immediately dampened by a word semantics in the form of competing versions of the communique but the real issues lie in the meeting’s essence and its central themes to which the two parties agreed upon. Whiplash!

Despite President Bihi’s speech which was the most memorable among the other speakers at the summit and completely overshadowed meek Farmajo whose remarks were just an elongated “thank you” to Abiy Ahmed, the Somaliland delegation made the biggest fumble by not insisting on having the issue of separation of the two countries as a central theme of the negotiation.

So now that we made you relive the emotional roller-coaster from the summit, we want to bring your attention to a central question that no one seems to be asking or answering: What exactly did Somaliland gain from the summit? Nothing, but it has lost even more ground for the fight to disentangle itself from Somalia.

Why “Free Movement of People” is bad for Somaliland?

It is a security disaster in the making

One of the articles that Somaliland agreed to at the summit is the free movement of people between Somaliland and Somalia, an issue raised by the Somalia delegation and incidentally one of the items that almost caused the talks to collapse.

Subsequent communiqués have gotten the public riled up on this particular item and the government has been unsuccessful in explaining how a potential mass migration from Somalia could benefit them.

The Somaliland government’s principal argument is that “people have always moved freely between the two countries before” and that it is nothing new. In that case, why is freedom of movement so important to the Somalia delegation?

On Independence day occasion President Bihi weighed in to swing back the public opinion about the summit and the free movement issue and added even more confusion stating that visas will be required for groups such as football teams and doubling down on the weak argument that people always moved freely between the two countries.

While everyone is focused on high profile personalities, football clubs, artists, and singers visiting Somaliland, an a critical aspect of the movement that seems to be glossed over by all is the security implication mass migration from Somalia will have on Somaliland, especially the ordinary people.

What made it difficult for terrorist groups such as Al-Shabaab from Somalia to infiltrate and take root in Somaliland is the fact that it is hard to blend in with Somaliland society and to a large extent, the public has helped to assist law enforcement in identifying terror suspects.

Comparatively, Al-Shabaab has been very successful in embedding itself in every aspect of life in Somalia and free movement provides them ample opportunity to position assets in Somaliland to not only attack targets inside Somaliland but Ethiopia which they see as an archenemy and Djibouti, home of America’s largest military base in Africa.

With Somaliland acting as a buffer, both countries have been safe from large-scale terrorist attacks. The freedom of movement between Somaliland and Somalia is very harmful to their security.

Berbera Port managed by DP World and multiple daily flights from Somaliland also represents viable targets to Al-Shabaab that could set Somaliland back decades in terms of development and reputation as a secure and peaceful nation.

Do Somaliland’s security services and intelligence have the technical capability to track and monitor hundreds of terror suspects simultaneously? Or could they trust NISA with its known ties to Al-Shabaab to share intel and help vet suspects? No matter how rife the Somali government is with a terrorist infestation, Somaliland will have no choice but to collaborate with it on security matters.

Mass migration between Somaliland and Somalia does not mean all Somalis coming across are terrorists, but what it does is create a golden opportunity for Al-Shabaab to gain even more fertile ground to bring more carnage and have easier access to attack Ethiopia and Djibouti.

In every previous round of negotiation with Somalia, Somaliland lost something precious such as its airspace, but this time it is about to lose its peace and security as a result of allowing unfettered and uncontrolled mass migration with Somalia.

Somaliland gains nothing from an unfettered and uncontrolled mass migration or integration with Somalia and what President Bihi and the Somaliland delegation have agreed to are potentially the most destabilizing factor to Somaliland’s and the peace and security of the entire region.

Hubris and lack of excellent advisors are President Bihi’s Achilles heel. He may have just opened the gates of hell.

Notice: This article by Somaliland Chronicle is licensed under a Creative Commons Attribution-Non-Commercial 4.0 International License. Under this license, all reprints and non-commercial distribution of this work is permitted.