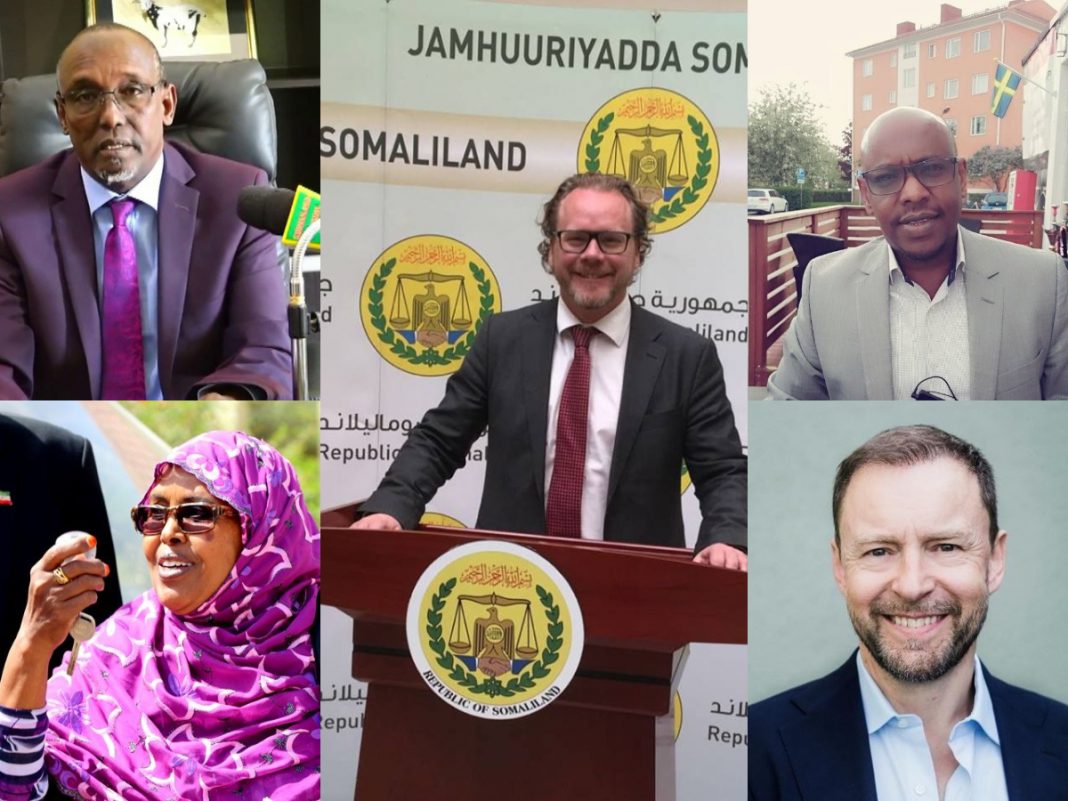 On June 11, 2019, a high-level delegation of Somaliland Ministers consisting of The Minister of Environment and Rural Development, Ms. Shukri Haji Bandari, the Minister of Minerals and Energy Mr. Jama Egal and the Minister of Livestock and Fisheries development Mr. Hassan Mohamed Ali Gafadhi visited Sweden and met with members of the Swedish Parliament, community and business interests looking to invest in Somaliland.

The delegation’s visit got off to a rocky start when members of Somaliland’s community in Sweden accused the Somaliland Representative Mr. Zakaria Waes of facilitating a meeting with the ministers with members of Sweden’s far-right Sverigedemokraterna party and Mr. Mikael Thorstensson.

The most important aspect of the trip, however, was unknown to the public until early November, when Somaliland Representative in Sweden Mr. Zakaria Waes wrote on facebook to expect the airing of an important program on SVT. This was a 7-minute segment about a project known as Somaliland Marine Conservation Project.

So what do we know about the Project?

Although the sequence of events surrounding the conservation project is unclear, there were two major events, a signing ceremony in Hargeisa and the project unveiling in Stockholm.

At a document signing ceremony in Hargeisa, Ministers Shukri and Gaafaadhi, Representative Waes and Skinnar provided some detail of what the project entails.

Mr. Gafadhi, who at the time was the Minister of Livestock and Fisheries Development spoke at this event stated that the conservation project will cover an area of at least 35% of Somaliland’s coast with a total ban on commercial foreign fishing.

The Minister of Environment Ms. Shukri who also spoke at the signing ceremony reiterated the importance of Somaliland’s marine resources but added that Somaliland’s all three Islands including the largest Sa’ada Diin will be part of this conservation project or agreement.

Now, let’s look at the cast of characters involved in what could be the largest and perhaps least known agreement the Somaliland Government has entered since DP World Berbera port agreement.

According to Somaliland Representative in Sweden Mr. Zakaria Waes, who we have spoken to at length for this story, the conservation project is part of Somaliland’s commitment to the sustainable development goals in the marine conservation sector and the fact that the Swedish National TV had an entire segment dedicated to Somaliland and the project could improve Somaliland’s image.

Mr. Waes stated that this could be the project that gets Somaliland noticed on the world stage and put it on the map. He added that the people working on this project, presumably Skinnar and Waller will walk our recognition papers into the tall building in New York, a reference to the UN headquarters in New York.

Asked if the project had the full support of the government of Somaliland, Mr. Weis repeated a statement he made on the SVT2 segment that the President of Somaliland, HE Muse Bihi Abdi himself had signed off on it.

Despite his unbridled enthusiasm, however, Mr. Waes seemed to have a tenuous grasp on the basic mechanics of the project and even though he mentioned investors a couple of times during our conversation with him, he did not provide details on how the investors will get their return on investment.

The Swedish Investors: Skinnar and Waller

Let’s start with Mr. Marcus Skinnar, an atypical fast-talking Swede with deep links to China and the owner Edurus, a company that supplies tombstones to the Swedish market.

This is not Mr. Skinnar’s first trip to Somaliland or first fishing related endeavor, in fact, he has visited Somaliland frequently as a member of Anglo Somaliland Resources. A British shell company that somehow convinced the government of former President Ahmed Mohamed Mohamoud to make it the sole agent to distribute fishing licenses on behalf of Somaliland.

It is unclear what happened to the existing agreement with Anglo Somaliland Resources and how it will be affected by the Marine Conservation Project. Both entities share a common denominator in Mr. Marcus Skinnar.

Mr. Skinnar who was in Maansoor Hotel in Hargeisa who spoke to us after a referral from Mr. Weis for more details on the project showed little interest in answering critical questions about this vast project and instead told us about his attempt to locate an undiscovered ancient pyramid in Somaliland. Mr. Skinnar, according to him, sees himself as an Indiana Jones of a sort.

Repeated attempt to get Mr. Skinnar to explain the project led to a lengthy explanation of how expensive electricity is stunting Somaliland’s economic growth and his plans to introduce underwater turbines that convert tidal currents from the conservation areas to produce cheap renewable energy.

Mr. Skinnar also took the time to explain how lucrative Somaliland’s untapped tourism sector, especially given its proximity to China and its vast and increasingly wealthy population.

Despite Mr. Skinnar’s hyperbole and repeatedly describing himself as a wealthy philanthropist, his company Edurus AB generated around 3 million US dollars in 2018 before taxes and expenses. This puts Edurus in the small business category.

On the event held to unveil the conservation project, Mr. Skinnar seemed to distance himself from Anglo Somaliland Resources and stated that it was a conversation with Mr. Waller that convinced him to end his relationship with them because of their connection with the Chinese fishing industry and its record of decimating fishing habitats in other countries.

Mr. Skinnar also shared a different business that he is currently pursuing in Somaliland related to mineral exploration and the potential for quarrying expensive marble and granite, he added that Mr. Mohamed Mohamed Abdirahman who is a trained geologist is his partner in that business.

It is worth noting that Mr. Mohamed Mohamed Abdirahman is still listed as a Director with Anglo Somaliland Resources.

Although neither Mr. Skinnar or Somaliland’s Representative in Sweden Mr. Waes revealed any useful information about how much the project they were unanimous in pointing out that Mr. Waller is the business brain behind the project and that he is working on assembling investors for the project.

Which brings us to the money man – Mr. Johan Waller.

Mr. Waller is the founder of a successful management consulting firm known as Business Wellness Group founded in 2002 that generated around 60 million dollars in sales in 2018, beyond that, we do not know much about him or his relationship with the conservation project and the fact that he is the businessperson who will get the funding together.

Unlike his business partner Mr. Skinnar, Mr. Waller is a man of few words who politely declined to speak on the record and provide any information about the project.

There are too many unknown variables with this project, starting with the astronomical cost required by such an effort and the fact that private investors do not see a conservation effort as a viable investment opportunity.

Mr. Waller, who makes a living showing other companies how and where to cut costs and how to maximize their profits will have a difficult time convincing investors to pour massive sums of money in a non-profit marine conservation effort.

Although tourism was not mentioned by either of the Ministers and only alluded to by Mr. Skinnar, it may be the most plausible reason that an investor will be interested in an island especially Sa’ada Diin.

It is also entirely possible that this project is a permutation of Anglo Somaliland Resources with conservation and a Swedish veneer.

Somaliland government has a history of signing agreements with shady entities with minimal due diligence. It is unclear how much effort went into vetting Mr. Skinnar and examining his relationship with Anglo Somaliland Resources.

It is also unclear if the Somaliland government completed any feasibility studies to understand the true cost of enforcing conservation on 35% of Somaliland’s coast or if tourism is a component of the agreement, how it will affect the fragile ecosystem of Sa’ada Diin and other islands.

Ministers Gafadhi and Shukri did not respond to request to comment on the project and attempts to reach the new Ministry of Livestock and Fisheries Development Mr. Saeed Sulub Mohamed Hussein were unsuccessful.