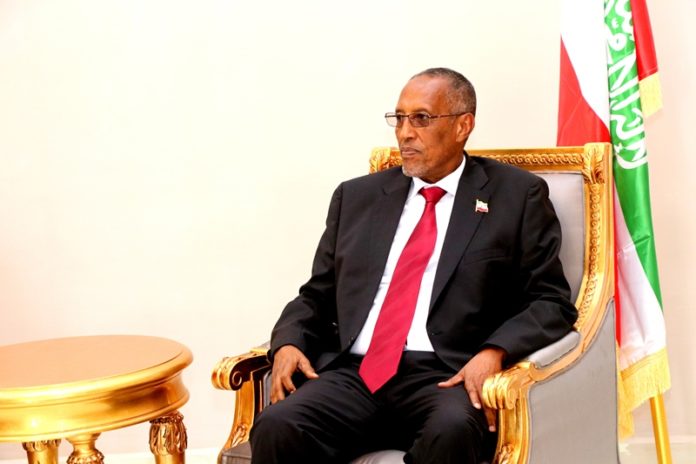 The Somaliland President Muse Bihi Abdi has just returned from making the Hajj pilgrimage in Saudi Arabia. Whilst in Saudi Arabia, he was met with and was rightly accorded the protocol of a Head of State. The social media images of the President aiding his elderly mother around Mecca and Medina not only highlighted his filial duties, but also, showed the humane side of a man often termed as stern, stubborn, unsentimental and strict.

The visit to Saudi Arabia concluded with several meetings with senior Saudi Arabian government officials and a well organized gathering with Somaliland community in the Kingdom. There were those among his supporters and detractors who will mention the lack of meeting with the Saudi monarch or crown prince, but, since Somaliland doesn’t currently enjoy de-jure recognition, it was felt that instead of the large ceremonial gathering with the Saudi monarch, a more productive meeting with Saudi Arabian decision makers would be more of a benefit to Somaliland.

As for that “infamous” photograph, it was a goodwill gesture on President Bihi’s part used for by the rogues in Mogadishu for infantile public relations stunt.

So, it was after this remarkable journey to the Hajj and it’s productive diplomatic elements, that President Muse Bihi returned home to a warm welcome and even a warmer political climate. Because, for all the diplomatic and personal glow from the Saudi trip, the presidency of Muse Bihi Abdi is at a crossroads.

President Muse Bihi has often stated that “he doesn’t mind criticism, because he had been in opposition all his life. That he welcomes constructive criticism and is willing to debate and engage all opponents through dialogue and discussion”. This is all very commendable, but if one doesn’t, much like history, learn from criticism, then what is point of being open to it?

The advice given to this President from many of his more seasoned advisers and more importantly from previous Presidents was, “Don’t isolate yourself, beware of the many, many, people who will trade on your name or position, be a politician, be flexible, be thick skinned, be strong, but most of all be generous, patient and accommodating”.

Now, I am sure, President Muse Bihi has taken aboard most of this advice, and has acted upon it. However, you still get the sense, that there are those among his own community, who keep whispering to him, “It has taken us a long time to reach this office, don’t be weak, don’t give in, don’t do that, or this, etc”. I could be wrong. I am sure the majority of the Somalilanders who voted for President Muse Bihi in 2017 were not all from his own community, because they voted for a strong leadership to roll back the malaise and corruption of the previous administration.

However, if some voted for the President on community basis, well, after almost two years, not even they bargained for the current predicaments facing the country.

Don’t get me wrong, President Muse Bihi has achieved many laudable gaols. I am a great supporter of the National Service. “Shaqo Qaran”. I think it is a wonderful programme that will build self-confidence, self-awareness, knowledge of self, the country and it’s people, in our youth. But, even then this programme has become tainted with nepotism and corruption.The President has campaigned to stop corruption, even sacking some high profile ministers over, alleged, accusation of fraud. The President has also carried on with the DP World Berbera project, The Berbera Corridor, and constituted a more focused approach on agriculture, education, health, fishing, commerce and industry, which are starting to show some results.

There have also been several historic diplomatic successes during the President’s term in office, the recent visit to the Republic of Guinea, comes to mind.

But, where the President, in my opinion, must receive a failing grade or if we are being generous, “must improve”, is domestic political policy.

One of the most important government agencies in Somaliland, is the Home ministry. This ministry is in charge of everything within our borders, from Police, Security, Local regions, etc,etc. It is clear that the current minister, Mohamed Kahin Ahmed, is not up to the job. The president remains loyal to his fellow party stalwart, brother-in-arms, and friend. It is laudable that the President shows loyalty to his colleagues and friends, but, Somaliland must be above friendships.

If the friendship and loyalty between President Muse Bihi Abdi and Minister Mohamed Kahin Ahmed is as strong as we believe it to be, then the truth between friends should not be painful. Minister Kahin is simply not up to the task.

The other torn in the president’s side is the current parliament and it’s destitution. Somaliland has now the longest sitting parliament, without elections, (14 years, 5000+ days), since the “Long parliament of 1642-1653” during the English civil war that cost a King his head. The House of Elders has been sitting for more than three decades ( 30 years) without reform. This is embarrassing!

And the worst thing about this situation is not because of a lack of will, support, logistics, data, or due to war, pestilence, drought or worse, but of leadership. The democratic credentials and progression of the country are being held hostage by “parliamentarians” who will not enact the bills to hold elections, by a political party afraid of losing it’s seats and majority in the house, by a opposition party afraid to trust the process, and by politicians who don’t want see their lucrative careers came to an end.

Finally, we come to the most alarming failure in domestic political policy. The blatant disregard for the law by both the government and the citizens which is leading to the fragmentation of the society.

We have the absurd situation in Somaliland, of a self enthroned “Boqor” raising militias and causing havoc in Sanaag. We have a renegade Colonel in the mountains, we are seeing soldiers from certain communities in the east bolting the country!

Mr. President, Somaliland is not just the corridor between, Gabiley, Hargeysa, Burco, Boorama and Berbera. You need to look east. You need to go there, base yourself there, and once and for all, remedy the situation.

We also need to invest in the quest for international de-jure recognition. Somaliland is blessed with many talented, urbane, influential and educated people, both at home and abroad. The indefatigable Edna Aden cannot to do it all alone. Empower our representatives abroad to take initiatives, engage the international communities. We need to lobby extensively. We have a strong and just case, and should not feel embarrassed to lobby.

I have a great empathy with President Muse Bihi Abdi, because deep down, like all of us, he loves his country and it’s people. All of its people. He just has to show that in deeds rather than words. The president must make sure that the elections take place. That those who feel marginalized become included. That equality, justice and freedoms are protected. That we do not cast “Maandeeq” away, again, like we did in 1960.

For all those old enough to have grown up, educated and worked in the region during the ill-fated union know there will always be social, cultural and even economic ties, but not political ties. There is a Somali saying ”Waa habeen xalay tagay”.