More
Home Economy Salt in Our Eyes – How The Minister of Investment conceded 150... 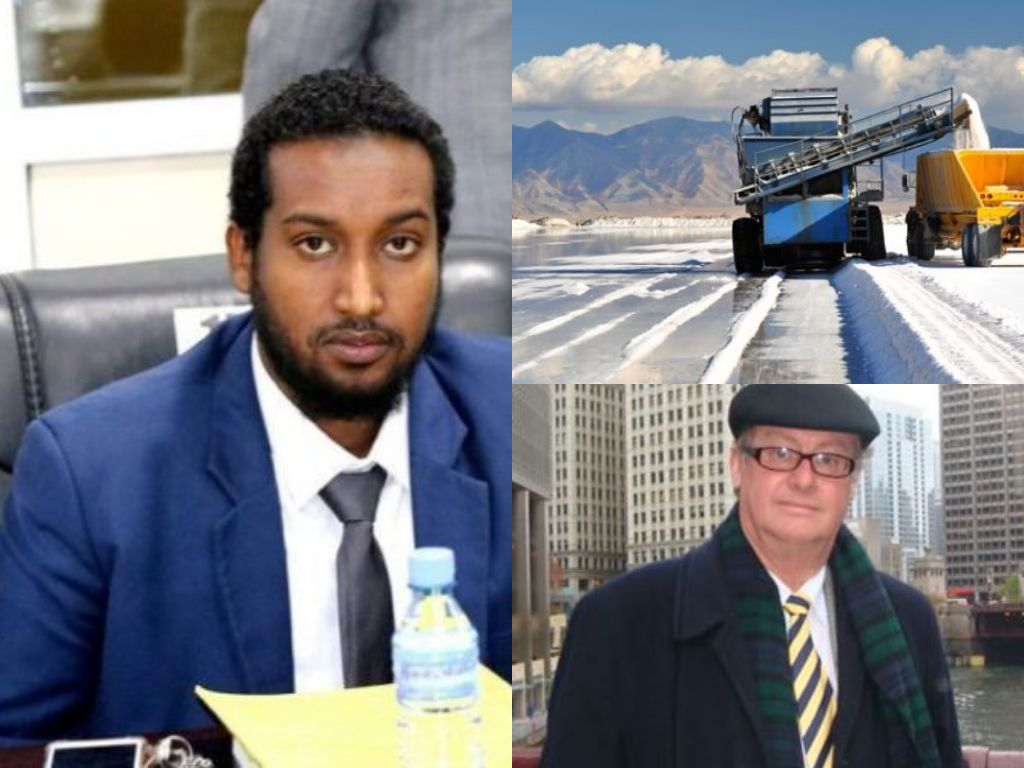 In October 2018, Somaliland’s Ministry of Investment and Salternas signed an agreement to develop the world’s largest solar salt production facility in Somaliland. This deal, according to the company will generate an estimated 9.6 Billion US dollars in 21 years, that is a whopping 450 million US dollars a year.

This is a good news, and if these figures hold any truth, this is the most lucrative deal Somaliland has ever signed. But before we get our hopes up, there are quite a few red flags with the deal, the company Salternas, its operators and some very basic facts. Let us examine this deal closely.

We have reported in the past on Somaliland government’s history of signing horrifically bad deals including a billion dollars MoU with fake Chinese company and giving the exclusive right to issue fishing licenses to a couple British crooks but this one is in a league of its own.

According to investor memorandum published by the company in its website, Somaliland government has conceded an area of 150 km2 of ocean front land in Berbera area.

“Already, Salternas has a binding agreement with the Somaliland Government for a renewable 25-year lease of 150 sq.km of oceanfront land to locate the project and its infrastructure, with an option for more, if required.”

To put the size of the area the company is claiming to have a binding contract on in perspective, the combined area of the UAE military base in Berbera and the port, currently managed by DP World is smaller than 150 km2.

The [shell of a] Company – Salternas

SALTERNAS PTY LTD is an Australian company created in 01-07-2012 (ABN 19 153 123 801) with two additional companies listed as subsidiaries Agrisal and Agrisalfood. The amount of information available on these entities is very limited.

These are private companies with absolutely no activity associated with them according to Australian Securities And Investments Commission’s database.

Then there is the German subsidiary Salternas GmbH which according to the company is the entity that will be actually doing business in Somaliland to mitigate sovereign risk. Here is the company’s explanation and how Somalia also fits into its calculus of minimizing its risk.

What does this mean? Salternas GmbH will take Somalia to the International Court of Justice in the event of a dispute. And to further mitigate their risk, Salternas plans to obtain additional contractual approvals from Somalia.

The fact that Somaliland and Somalia are separate countries are irrelevant to Salternas. More on this later.

Document filed with the German authorities, the total share capital listed by Salternas GmbH is 25,000 Euros

So is Salternas qualified to undertake an effort of this magnitude? The answer lies in one of the risk factors the company lists in its information memo and its a resounding negative.

Salternas is headed by Mr. Colin Roberts, an Australian Attorney who specializes in resources and dispute arbitration. Before Salternas, Mr. Roberts was the head of an Angolan mining interest called Sable Minerals GmbH. Sable Minerals operated as yet another subsidiary of Rift Valley Resources.

Additionally, it has a team of former engineers with one notable Somali gentleman – Mr Mohamoud Jirdeh Hussein.

Mr. Mohamoud Jirdeh Hussein comes from one of the most prominent families in Somaliland but seems to have held various high level positions in successive Somali Governments.

Salternas displays a remarkable lack of basic understanding understanding in Somaliland especially how the public views those that are aligned with Somalia. This is Mr. Jirdeh Hussein’s bio on Salternas website “He was appointed Deputy Chairman of the Somali National Government Reconciliation Committee; Minister of Health; Minister of Labour, Social Affairs and Youth and Sport; Somali Diplomatic Representative at London Olympics and attended the Non-Aligned Movement Conference in Iran“

This is the first time that he is reported to be involved in a business in Somaliland.

In addition to Mr. Jirdeh Hussein, there is also Mr John Balfe and a Somalia
Connoisseur who seems to have done a lot of business with successive governments of Somalia including unspecified work on Somali Air Traffic Management.

This brings up an important question: Why hasn’t Salternas implement its salt production facility in Somalia where their principals are well connected?

Salternas has no money to finance a project of this magnitude and its operators are not putting any in skin in the game, instead, they have convinced Somaliland government to sign over 150 km2 of the most strategic and sought after land in the world on a handshake and perhaps a pie in the sky.

Salternas is currently raising 14 million Australian Dollars to finance the first phase of the project to conduct even the most basic aspect of a project of this magnitude.

It is unclear if Salternas has been successful in raising any funds so far.

The most alarming part of this agreement between Somaliland and Salternas is the fact that Somaliland does not own any part of the salt production facility.

Additionally, there is absolutely no information related to if Salternas will pay ground rent to Somaliland for use of 150 km2 or the use of its natural resources to produce its core product of salt.

Even though Salternas and Mr. Roberts took great pains to explain to their investors how they have minimized and mitigated the risk from this project, there is simply no mention of how Somaliland will share in the profits with Salternas.

There is however, one thing that that Salternas will do for the people of Somaliland, and that is it will feed them in a rather non specific way by creating a zero hunger conditions in Somaliland and relieve them of famine.

Has Somaliland done its homework?

It does not look like Somaliland’s Ministry of Investment, though charged with the herculean task of attracting investment to Somaliland, has done any due diligence and may have signed a contract instead of a simple Memorandum of Understanding. According to Salternas, they have a binding contract with Somaliland.

Our search to information and details about this agreement has led us to the Ministry of Investment, where the Minister, Mr. Mohamed Ahmed Mohamoud was kind enough to give us some background on the project including the fact that the agreement was actually signed by the former Minister of Commerce Mr. Mohamed Abdillahi Omer and that he simply renewed an existing agreement.

We have reached out to the former Minister of Commerce Mr. Mohamed Abdillahi Omer to ask him about Salternas and the agreement he has signed with them on behalf of Somaliland. Here is his answer verbatim.

Dear [Somaliland Chronicle],
Thank you for your contact . In relation to your question, I want to tell you that i have never signed a n agreement / concession with Australian or any any company. The Ministry of Mines are responsible for dealing such duties. but i recall an Australian man who was arrogant who called me when I because the trade minister on one occasions and asking me why I was not acting his Request for investment on project around Berbera area which I refused to process because it was clear how he was investing the project . I don’t recall the details of his project at the time . If that’s the case you are referring to I did not sign nor accepted his requests ..
Regards –
Mohamed

We have shared additional details with the ministry of investment including the recently made public Salternas Information Memorandum. It is unclear if the ministry will be taking any steps or undertaking a review of the agreement.

Salternas and Mr. Colin Roberts did not respond to our request for information for this report.