Home News The Uniter in Chief – Somaliland President’s Visit to Eastern Regions and... 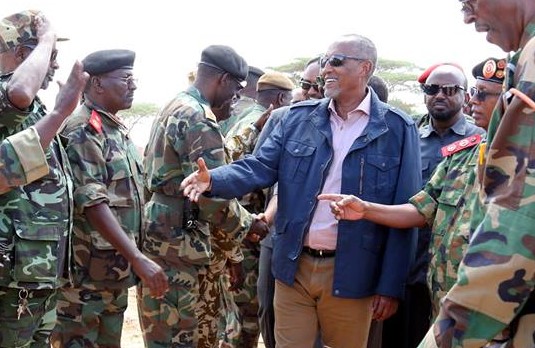 Somaliland President His Excellency Muse Bihi Abdi has been on a whirlwind tour of the country east, starting with Berbera followed by Burao and Odweyne. This is the first time the President has been to these regions since his election as the 5th President of Somaliland.

One of the major stops on the President’s itinerary was Burao where he met with elders to discuss the country future and his commitment to bring the country together after the bitter election contest almost a year ago.

In Burao, in an emotionally charged address, the President made his intention clear to the world and particularly to Somalia that Somaliland will not be tamed by anyone and their pleas at the Security Council will not stop Somaliland and that the country will stay on the path of advancing its agenda of peace and prosperity.

The President used Asasias Afwerki of Eritrea to make his point that even if the entire world is against you, patience is a virtue that Somaliland has in abundance and no matter how much Eritrea was pressed and squeezed it never deviated from its path and that the world has finally came to the negotiating table and gave in to what it actually wanted.

A central theme of the President’s visit to the Eastern regions was to strengthen governance strictures and unveiled many infrastructural projects.

Major opposition figures did not accompany the President on his visit but there are reports that there is a progress being made behind the scenes on couple of fronts including the possibility of compromise to ensure elections are held on time.

President Bihi has visited Somaliland troops in the frontlines in Tukeraq. The President reminded the troops of the enormous respect they command among the public and spoke of their role in securing the country’s borders.

While talking to the troops, the President touched on the recent conflict with Puntland and their claim over the territory of Tukeraq on grounds of tribal lineage and stated that all disputes must be discussed peacefully and that all Somaliland has done so far is to defend itself from multiple attacks.

On the same day, President Bihi visited Lasanod, the capital of Sool region where he was welcomed by community leaders.