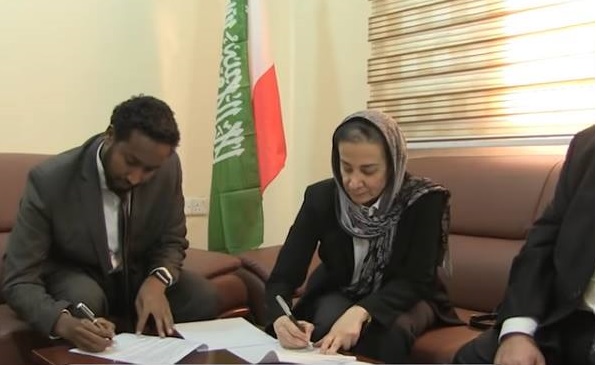 In psychology, “being in denial” is accepted as a defense mechanism in which a person, faced with a painful fact, rejects the reality of that fact. The classic symptoms of denial and delusion were on display today at a hastily convened Ministry of Investment press conference.

The purpose of the conference was to refute the Somaliland Chronicle’s claim that the bank the Minister and Director General described as  “a world famous Chinese bank which was committed to spending $1 billion (US) in Somaliland” was in fact fake and did not exist.

The Director General of the Ministry of Investment Ahmed Abokor Mohamed showing papers to the media insisted that they have ensured that Maxtor Bank is all too real and the various registration from Hong Kong and a letter from the State of Colorado proves that Maxtor Bank is in fact a real bank.

Additionally, representatives of Maxtor Bank in Somaliland have also spoken to the veracity of the bank and insisted that in fact it is all too real.

Both the Director General and the Bank representatives, repeated an earlier claim that the bank has been looking into Somaliland for sometime and that this is their third time to visit Somaliland.

As part of the research that Somaliland Chronicle has done, the registration of Maxtor Bank Inc is in fact real even though as Professor Abdisalam Yasin, one of the representatives of Maxtor Bank stated, a company being registered generally means nothing.

The biggest piece of evidence both the Ministry and Maxtor representatives furnished to the media is Maxtor Bank’s registration with the State of Colorado. This is a fact we have reported earlier and the registration is legitimate. Unfortunately, it does not mean anything.

The registration of Maxtor Bank Inc was completed with the Colorado Secretary of State’s Office 11/05/2018 and Maxtor Bank International Bank Inc on 11/07/2018. Both entities share the same principal by the name of Xingmei Zhao and an address of 2001 16th St, Denver Co 80202.

The first problem is the actual date of incorporation of either entity which are both less than 3 months.

Another problematic piece of information is the address on the registration – 2001 16th St, Denver Co 80202 is actually a parking lot that is still under construction.

Somaliland Chronicle has informed the office of the Secretary of State of Colorado that Maxtor Bank Inc seems to be operating out of a parking lot.

Maxtor Bank is also registered with the UK authorities on 12 June 2018 under a different name – Maxtor International Limited (Company Number 11410811). Once again, Xingmei Zhao is listed.

One of the representatives of Maxtor Bank curiously explained his relationship with an entity he called “Maxtor IT Trading Co.” We assume this is what the Director General was referring to when he said Maxtor Bank has many subsidiaries, but what is equally perplexing is that Maxtor IT Trading Co. was also registered on July 30 2018.

On Maxtor IT Trading Co.’s Chamber Of Commerce certificate,  the Economic Activity is not banking or investment but instead “ICT Firm”.

Both the representatives of Maxtor Bank and the Director General have insisted that Maxtor Bank has major investments in Malaysia, Sri Lanka and other parts of Africa without presenting any supporting evidence of such investments.

Once again, we are uncertain how Maxtor Bank Inc could have done all the purported investments in those countries since it was registered in either May or July of this year. In fact Maxtor Bank is so new their trademark was also filed on July 18 2019.

On the claim that Maxtor Bank has invested in other countries, we were able to locate the registration of Maxtor IT Trading Senegal – Not Maxtor Bank. The purported capital of the Senegalese subsidiary is 1 million Senegalese francs or a whopping 1,783.10 US dollars in today’s exchange rate.

Curiously, the Senegal operation is also focused on IT and not banking.

On Maxtor Bank’s facebook page, there are a dizzying array of documentation, very unsual for any company to be sharing what many companies regard as sensitive information. But in the case of Maxtor Bank, it seems that they are intent on convincing someone of their legitimacy.

One of the photos shared on their facebook is what is known Financial Crimes Information Center operated by the United States Department of Treasury. We are unable to find the registration number shown (3100012924951) in the above document. This is simply a forged documented.

It is also important to note that almost every piece of documentation associated with Maxtor Bank has been created in the last 2 – 3 months.

In today’s media appearance the Director General who vigorously defended the due diligence his ministry has done on Maxtor Bank stated that they have offices in many part of the world including Denver Colorado, and while both the Ministry and Maxtor representatives have shown the same documents we have shared in this article, no one bothered to explain what type of due diligence was undertaken.

Anyone can register a company and call is Janitorial International Bank, it just does not make it a bank. I can unequivocally tell you that Maxtor Bank is a fraud

We have spoken to a retired financial expert who has worked for major banks including S&P, JP Morgan and Merrill Lynch in mergers and acquisitions about Maxtor Bank.  “Due diligence 101: always check their numbers and independent audit report to really know who you are dealing with in business. Anyone can register a company and call is Janitorial International Bank, it just does not make it a bank. I can unequivocally tell you that Maxtor Bank is a fraud” He said.

While Maxtor Bank’s paper trail shows a deliberate attempt to frantically create concoct semblance of a company registered in multiple jurisdictions, unfortunately, we are unable to locate any financial information. There are no market capitalization, asset under management, number of employees or any other valuable information available to evaluate Maxtor Bank, an investor claiming to have access to billions of investment dollars.

Both the Ministry and the representatives of Maxtor Bank in Somaliland insisted that “the Memorandum of Understanding does not mean they are taking something from us” however we know the modus operandi of such unscrupulous and fraudulent entities.  Had the Somaliland Chronicle not broken the story the Ministry of Investment would have been asked to pay the banks fees up front or in advance.

Somaliland Chronicle stands by the findings of its research that Maxtor Bank is not a bank but a newly formed entity with no history or track record. Further the misrepresentations of the company as a “world famous Chinese bank” which the Minister & DG bought demonstrates a clear fraudulent intent.

The incident undoubtedly casts a negative shadow on Somaliland’s credibility in terms of competence and administration.  Ministers and senior civil servants with such naivety and gullibility are simply an affront to the Somaliland public.