The Somali President Mohamed Abdullahi Mohamed has taken steps to consolidate power by sacking the Speaker of the Parliament Mohamed Osman Jawari. This contentious move has brought wartorn Somalia to the brink of yet another civil war that brought rival armed militias and running gun battles in the Parliament until the Speaker finally stepped down. 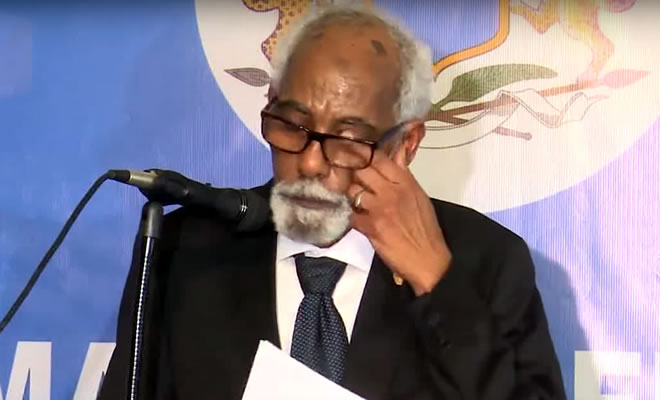 Mr Jawari’s ouster while given a flimsy democratic façade, complete with a no confidence vote, it was clear that he was being ousted for breaking rank with the Executive Branch on a wide variety of issues including the dispute that erupted last year between Qatar and Turkey against Saudi Arabia and its ally, the United Arab Emirates (UAE) and according to some analysts, Somaliland’s Berbera Dubai World Ports.

Mr Jawari’s impassioned final speech included these words “I considered the advice from people and took one word which is “one of us has to give up”. 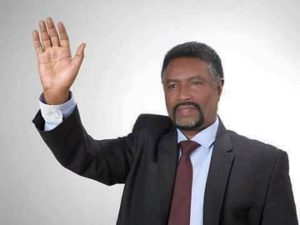 With the ouster of Mr. Jawari complete, Mr. Farmajo has installed Mohamed Mursal Abdirahman, who has resigned his post as Defense Minister a month ago before Jawari’s no confidence vote and resignation. Mr Abdirahman, the new Speaker of the Parliament has miraculously secured over half of the votes from lawmakers that took part in the vote, deputy speaker Abdiwali Ibrahim Muudey said.

Many Somalia observers have pointed to a classic power grab where the Executive Branch sees dissent as a simple obstacle that should be removed. 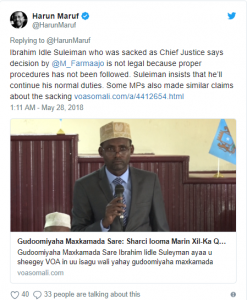 Continuing on this dark path that in its essence is the very reason that Somalia is a failed state. Mr. Farmajo has sacked the country’s Chief Justice without a cause. If one is keeping track, two of the highest ranking officials in Legislative and Judiciary branches fired within days by the President.

The appointment of the new Chief Justice Bashe Yusuf Ahmed was received with mixed reactions in Somalia as some questioned if the young lawyer is qualified to be a chief justice as the constitution requires a minimum of seven years of work experience as a lawyer or in a high judicial position. While others, pointed to his blood relation with the Deputy Prime Minister Khadar Gulaid.

Despite his seemingly thin qualification as a Chief Justice of a war-torn country, many saw his appointment as politically motivated as he was an active member and high ranking official of the Wadani Opposition Party in Somaliland.

Public records show that Mr Bashe Yusuf Ahmed received a Master’s Degree in Commercial and Maritime Law in 2014 from the University of Hertfordshire. There is no record of him defending, prosecuting a case or acting as an officer of the court at any capacity. Many analysts have pointed to this thin experience when discussing the new Chief Justice and stressed that the Somali constitution requires a minimum of 7 years of law practice.

Mr Yusuf, however, has an extensive experience working with International NGOs such as Mercy Corps who has congratulated him in a tweet of an unflattering picture that highlighted “the field” oriented nature of his work. 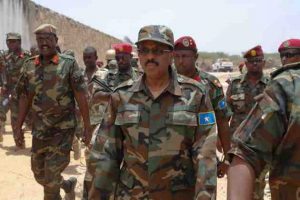 Mr. Farmajo who is a United States citizen and has lived outside of Somalia since its collapse in 1991 has recently started donning military fatigues. It is important to note that though, the Somali President is the Commander of the armed forces, he has never been in the army or seen any combat.

These dictatorial actions by Mr Farmajo to install an inexperienced or a member of his own cabinet in as the heads of the Legislative and Judiciary branches have alarmed international community including AMISOM, where some spoke on condition of anonymity and have accused Mr. Farmajo of power consolidation and setting the stage for his reelection by ballot or by simply cancelling elections. With special emphasis on Mr. Farmajo’s American citizenship, a representative of a major financial donor to Somalia said “Somalia has gotten itself an American dictator”.