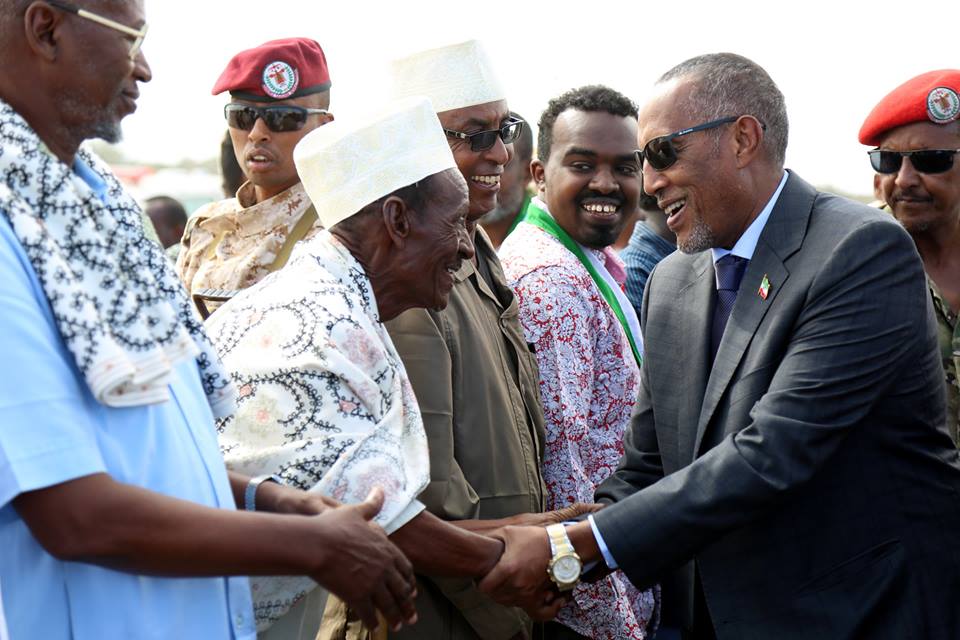 I have been carefully observing President Muse Bihi’s multiple visits and speeches during the last few weeks. First, I have to admit that his one-week long state trip to the eastern regions of the country and the overwhelmingly warm welcome he received from the populations in that part of the country, both boosted his confidence and energised him.

After one year of total confinement to the presidential palace, it was an exciting adventure for him and a convenient way to gauge public approval of his performance and leadership.

However, it is fair to say, that nothing concrete can be deduced from these public outpourings regarding his actual performance since the majority of the citizens are from a low educational background and impoverished economic conditions as well as the ravaging unemployment.

I will mention a few important points which captured my attention about the speeches of the President. To begin with, a conciliatory tone- towards his opponents and the seemingly over-sensitive Togdheer region- has dominated his public discourses.

He repeatedly called for unity, cooperation and respect for last year’s democratic transition, a narrative reminiscent of his infuriating feeling of simmering dissension from some of that region’s constituencies, and the absence of a long due appeasement initiative for an injured pride subsequent to last year’s elections, from his part.

Another overtly detectable thread in his speeches is the presence of strong sentimental feeling about his past military struggle against the Siyad’s dictatorship regime and the destructive brutality the People of Somaliland courageously endured.

It was apparent that that feeling has subconsciously impacted on his political approach towards the recent threats from the current president of the Federal government.

Although history must be preserved and kept alive in the collective memory of our society, and we should learn valuable lessons from that inglorious period of our nation, we must not allow it to overtake our thinking and planning for the future.

Today’s citizens were astride over the dividing line in that conflict and through a tiresome reconciliation process, in which the President was an influential mediating figure, we moved forward to an inclusive, democratic, triparty system. So that, continually recalling that devastating war into the public discourse serves only those bent on segregating Somalilanders along tribal borders.

The President’s dissection of the multilayered problems we have is both admirable and bold; it shows that he has a clear understanding of the many internal and external challenges and difficulties our country is facing. Notwithstanding, exploring fundamental solutions for these challenges is an assignment yet to commence, namely the widespread unemployment, political stagnation and high inflation.

One of those chronic problems we have is the health care provision nightmare. Just yesterday, the President visited Hargeisa Group Hospital -a long time neglected and progressively deteriorating public institution- to lay the foundation stone for a new Maternity and Neonatal department and to assess the meagre progress that has been made since he came to power.

He spoke about how the behaviour and character of a lot of health care professionals changed and the effect this will have on their patients. He highlighted some of those changes are inhuman, aggressive and repulsive to the public and that both the reputation and quality of their care have consequently declined.

He also lamented the plight of many chronically ill citizens who embark on long trips to foreign countries for health services they could have received in their country if we put our efforts together and improve the appalling conditions of our public and private hospitals.

Apart from occasional insignificant details, the President’s speech couldn’t be more timely and pertinent. And it is a fact that the health sector, with few exceptions, has been persistently hemorrhaging.

For me, health care is a profession that I am both extremely grateful and fortunate to belong to, and what I believe this crucial sector needs, is an overarching strategy to uplift it from this squalid slum.

The core issues for the health department are lack of appropriate funding and incompetent management, which in turn has led to the emergence of a greedy and unscrupulous private health section with minimum expertise and knowledge.

To solve the problem, an elaboration on the analysis of the problem and compassionate pleas for better treatment of patients will not be sufficient. The president should implement his national health plan, come up with the needed resources and exert a powerful authority over the unabashed health care dinosaurs.

We need an applicable policy to nurture the individual capacity of the health care workers, from the most senior doctors to the lowest ranking staff. It is unacceptable for the Ministry of Health not to have a program for continued medical education. Where the Ministry of Health offers on-the-job training courses to its employees to increase their knowledge in their chosen specialities, upgrade their CVs and build a medical experience portfolio.

Such opportunities will surely increase job satisfaction among the majority of health care staff, in addition to the strong inspirational effect it will have on the recently graduated doctors. Modest Measures, like that, will raise their currently rock-bottom morale and strengthen their determination to learn, excel in their role and treat patients and the public with the dignity and professionalism they deserve.

When the government satisfies the legitimate needs of health professionals and workers, including decent salaries, proper training and adequate medical equipment, until such time, any demands from the Health professionals to unilaterally fulfil their duties without improvement in their conditions would be unreasonable and unjust.

About the Author  Dr. Abdikarim D Hassan
MSc Diabetes and Endocrinology at Salfor Univeristy, UK.  Dr Hassan is a freelance writer with special interest in good health care and Education for all citizens. He can be reached on Qurbe206@hotmail.com;

Notice: This is an article by Somaliland Chronicle is licensed under a Creative Commons Attribution-NonCommercial 4.0 International License. Under t