There has been unconfirmed reports of massive debt left behind by the previous administration ranging from 80 to as high as 160 millions but there has been no official acknowledgement from Somaliland government and previous Finance Minister Ms Samsam Abdi has vehemently denied the existence of the debt all together.

Somaliland Chronicle has asked the Minister of Finance Dr Saad Ali Shire the following the gain a better of understanding of Mr. Buubaa’s comments regarding the alleged debt.

Somaliland Chronicle: We are seeking clarification about MP Buubaa revelation of the $80 Million Dollar Debt as you did not actually mention it during the press briefing following your meeting with the Parliamentary committee. Can you confirm the former administration has actually left an $80 Million dollar debt and if so, has any of it been repaid?

Minister Shire: In short, the answer is ‘NO’.

But just to give you the context of the press conference. Each year,  the law requires the auditor general to audit the national accounts and submit his report to parliament for scrutiny. In that context, the parliamentary committee responsible for overseeing and safeguarding national assets invited me to a meeting. The purpose of the meeting was to share with us the report of the parliamentary committee based on the auditor’s report and their recommendations on 2017 budget. The meeting went very well. We discussed several issues including asset registration, debt management, and fiscal discipline. The amount of debt owed by the government was not discussed; that was not in the auditor’s report and that was not in the parliamentary committee’s report either. Like all governments on earth, our government owes outstanding bills to contractors and suppliers at any time, but it NOT does owe $80 million. That is sheer fabrication.

Mr. Buubaa is a member of the Wadani opposition party and until today has served as the official Spokesman of the party. He has been replaced with Mr. Barkhad Jama Batun. 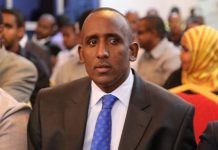 The negative impact of political polarization on ‘Health security’. The case...