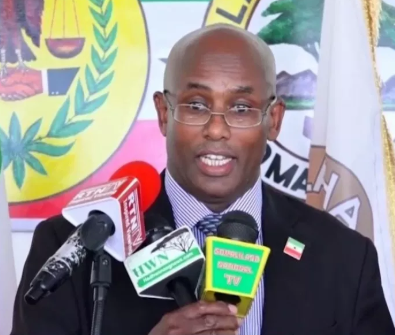 Nasir Ali Shire was the vocal and fast-talking Chairman of Public Accounts Committee and lately has managed to make powerful enemies. So powerful, in fact, that the Speaker of the Parliament has publicly undermined him, apologized to them and finally removed Mr Shire as the Chairman.

How did Somaliland get here, what did Mr Shire uncover and where was the investigation going?

In this special report, Somaliland Chronicle is going a little deeper to give you a ringside seat of the spectacle that led to the removal of Nasir Ali Shire as the Chairman of the PAC committee.

It all started when Hon. Shire presented a corruption case related to the former Minister of Public Works Ali Hassan Mohamed “Ali Marehan” and the sale of the publicly owned and most prime real estate land in the heart of Hargeisa to Dahabshiil.

The cries of foul were swift and immediate against Mr. Shire, where some immediately accused him of cherry picking and purposefully not investigating his older brother Dr. Saad Ali Shire, who served as Foreign Minister in 2016. Others have accused him of completely ignoring others from his own tribe who might have misappropriated public funds.

In a brazen media blitz the Former Minister of Public Works Ali Hassan Mohamed “Ali Marehan” demanded an apology from Mr. Shire and stated that the allegations are entirely unfounded.

In one appearance, the former Minister, received an apology from current a member of Somaliland’s parliament who did not appear to be connected with the Public Accounts Committee or the investigation but appeared to side with the Minister.

And while this apology seemed very odd, the Speaker of the Parliament flanked by his deputies, followed up with a direct apology to Dahabshiil citing documents the firm has submitted to him. These documents were not presented to the public.

Mr. Shire’s methodical approach to his work was unlike anything Somaliland Parliament has seen, he brought an engineer’s precision to a chaotic environment and amassed a large cache of documents to untangle the web of corruption that has made millions of dollars of public funds vanish into a thin air.

While Mr. Shire has won many supporters in the public, especially with the backdrop of President Muse Bihi Abdi’s effort to bring back major public infrastructure facilities under the control of the government. Others have viewed Mr Shire’s work with justifiable angst and every thread he pulled made him more powerful enemies.

The Speaker of the Parliament Mr. Bashe Farah has privately confided in close friends in how blindsided he felt by President Bihi’s decision to re-nationalize the Berbera Oil Terminal and Storage facility.

Mr. Bashe was involved in a fist fight to try to pass the legislation to transfer these facilities to private firm Berbera Oil Group with the former speaker of the Parliament Abdirahman Abdillahi Cirro.

While, Dahabshiil and its business dealings were not the subject of the investigation, it is important to note that the property was severely undervalued for unknown reasons and the entire sale and transfer process was closed to the public.

According to Mr. Shire, the ministers as well as Dahabshiil become entities of interest while investigating the stalled reconstruction of Burao Penitentiary where 400 thousand dollars of the proceeds from the property sold to Dahabshiil was allegedly used.

This is the public version of the story but there is more to it. According to sources in both executive and legislative branches in Somaliland who are familiar with where Mr Shire was headed with his investigation stated that he was planning to “follow the money” and was in the process of issuing to subpoena financial records of certain ministers from Dahabshiil and Salama Banks.

According to these sources, Mr. Shire reasoning to subpoena bank records was based on the fact that large sums of money cannot be moved out of Somaliland without the help of either Dahabshiil or Salama banks and simply seeing financial records of persons of interest will ultimately answer how public funds were misappropriated.

If confirmed, this is unprecedented move in Somaliland history, where an investigation was conducted with not only international standards but Mr. Shire was shaping up to be Somaliland’s own Robert Mueller.

The President of Somaliland HE Muse Bihi Abdi is said to be following Mr. Shire work with keen interest and sources close to the Presidency confirm the President sees parallels with the work Mr. Shire is doing to his own efforts to untangle the web of corruption that many allege to have taken place during President Siilaanyo’s Presidency.

It is unclear if Mr. Shire has shared any of the large cache of documents he has amassed during his investigation with the President who has privately complained that he was left with zero records to understand what went on prior to his arrival in the Presidential palace.

What is clear though is that President Bihi will be taking a page from Mr. Shire’s method and all future investigations will start with the premise of “following the money”.

While many wonder why President Bihi has not intervened in the removal of Mr. Shire, its important to note that the executive and legislative branches are separate and co-equal branches of the government and the President is constitutionally barred from injecting himself in parliamentary affairs.

Dahabshiil on its part, while not commenting publicly on the investigation, the removal of Mr. Shire from the PAC committee or how it acquired the largest real estate parcel in the heart of Hargeisa for pennies on the dollar, are said to be very apprehensive about the possibility of subpoenas of  financial records by Somaliland government.

Adding to Dahabshiil’s headache are President Bihi’s review of all contracts signed by his predecessor including the sale of the Berbera Cement Factory to Dahabshiil and other partners.